Now we know where Baghdad Bob has been hiding — in the White House.

President Biden looked and sounded Monday as foolish as the Saddam Hussein mouthpiece who declared Iraqi victory even as American troops seized Baghdad.

The Iraqi stooge became the stuff of late-night comedy a generation ago. Biden has doomed himself to be the master of disaster for a new generation.

His insistence that he made the right decision in pulling all troops out of Afghanistan is ridiculous and defies the reality unfolding before our eyes. The horrific images of whole families running for their lives and of men jumping on moving airplanes at the Kabul airport to escape the Taliban are unforgettable. Imagine the fear required to risk everything by clinging to the outside of a plane as it taxies for takeoff.

If this is success, Mr. President, what would failure look like?

Those scenes stain the reputation of the United States in the eyes of the world. No ally can sleep knowing Biden will cut and run when the going gets tough.

China, Russia and Iran will celebrate the evidence of a weakened America under a weak president.

For a man whose sense of empathy was shaped by personal tragedy, Biden came off as cold and uncaring about the Taliban’s habit of bloody revenge. His promises that he would get all Americans and thousands of our allies safely out don’t appear realistic given that the Taliban control all of Kabul, including the roads leading to the airport.

The icy coldness in his speech was matched only by his dishonesty in presenting the ­choices he faced. His claim that he either had to commit more troops endlessly or leave now is a shameful lie.

After years of missteps and overreach, the US had finally reached an acceptable outcome in Afghanistan. With just 3,500 military personnel on the ground, we had achieved something of a stalemate. Neither the Afghan army nor the Taliban could vanquish the other in their civil war. 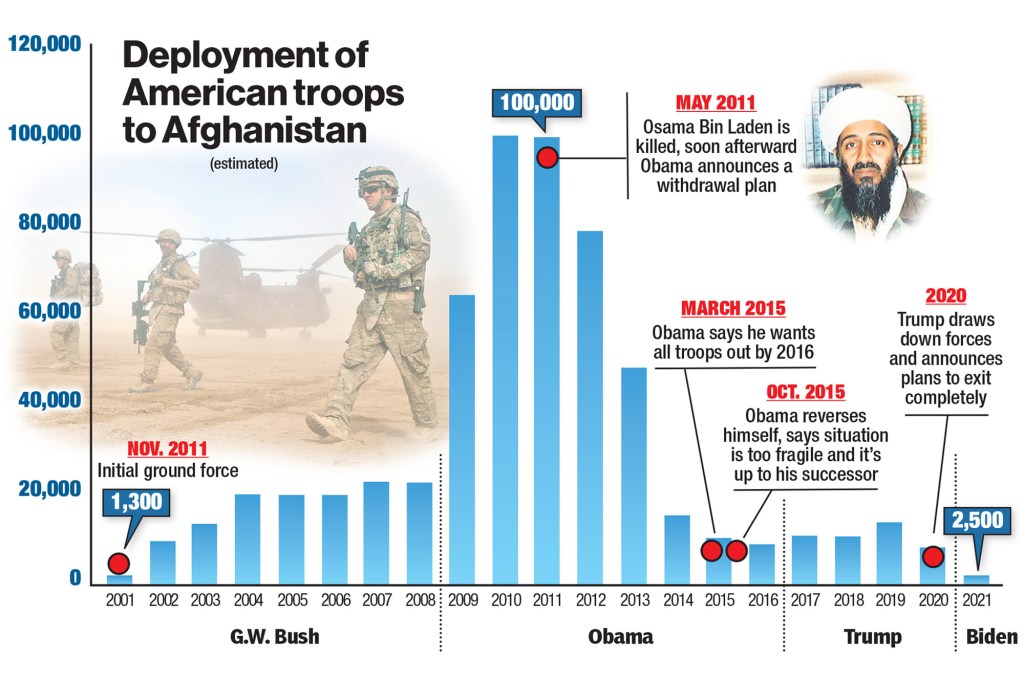 The Defense Department says 2,352 service members died in Afghanistan, including 1,847 who were killed in action. The deadliest year was the height of deployment, with 496 dying in 2010. No Americans have died in battle there since February 2020.

Yet America was achieving the initial objective set after 9/11 of denying Islamic terrorists a safe haven for attacks on our homeland. And at a remarkably low cost, with not a single US soldier killed in combat in the last 18 months.

It is true the stalemate followed many years of foolish attempts at nation building, and the deaths of some 2,400 servicemen and women were an awful price. But by giving up on the mission, Biden dishonors the sacrifices made by so many soldiers and their families.

And for what? So he could keep his promise of ending the “forever war?” By that logic, we should pull our 28,000 troops out of South Korea, jettison NATO and abandon all our friends everywhere.

Indeed, Biden’s decision to send in an additional 6,000 troops just for the rescue mission shows the folly of his weakness. We will have more troops in harm’s way thanks to his initial decision. He has now upped the ante just to cover for his mistake.

Yes, President Donald Trump signed a bad deal with the Taliban, especially in getting the Afghan government to release 5,000 prisoners. But Biden has no hesitancy in reversing other Trump policies, and there was no reason why he had to embrace the decision to bring all the troops home when the mission had found the right balance and was succeeding.

Biden, in his most convoluted passage Monday, claimed the collapse of the Afghan army in the last two weeks proved the correctness of his decision.

Bull. It proved just the opposite. The Afghan army was never going to be first-rate, but it was good enough as long as it had the support of American airpower and intelligence.

In the last 20 years, Afghan soldiers died by the tens of thousands fighting for their country, and it is beneath a president and commander in chief to slander those who died fighting alongside our troops. 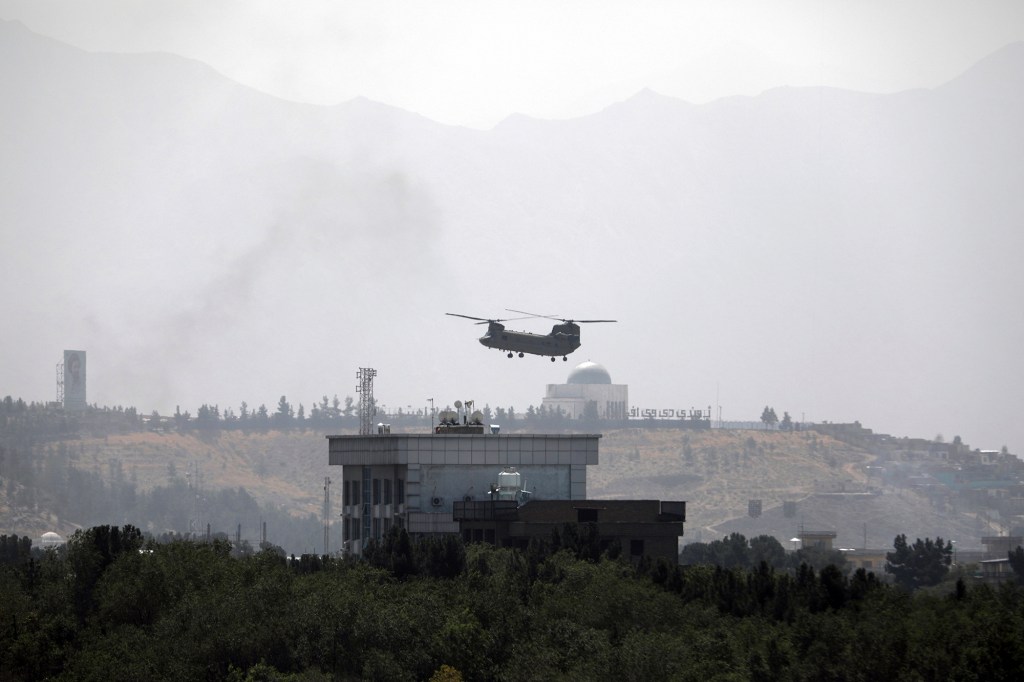 Helicopters are landing at the U.S. Embassy in Kabul as diplomatic vehicles leave the compound amid the Taliban advanced on the Afghan capital.AP Photo/Rahmat Gul

Besides, why didn’t Biden’s team, including the CIA, know how weak the Afghan army was? Why was such a momentous event a surprise?

It is worth noting that Biden’s own generals advised against his plan, arguing that an additional 1,000 troops would be enough to maintain the equilibrium and preserve our national security.

Instead, the president quit and signaled that the Taliban would eventually win. It is highly likely that America’s sudden retreat is what convinced the Afghans that defeat was inevitable. No soldier in any war wants to be the last one to die for a lost cause.

Robert Gates, a former defense secretary and Washington wise man, famously said of Biden that “I think he has been wrong on nearly every major foreign-policy and-national security issue over the past four decades.” 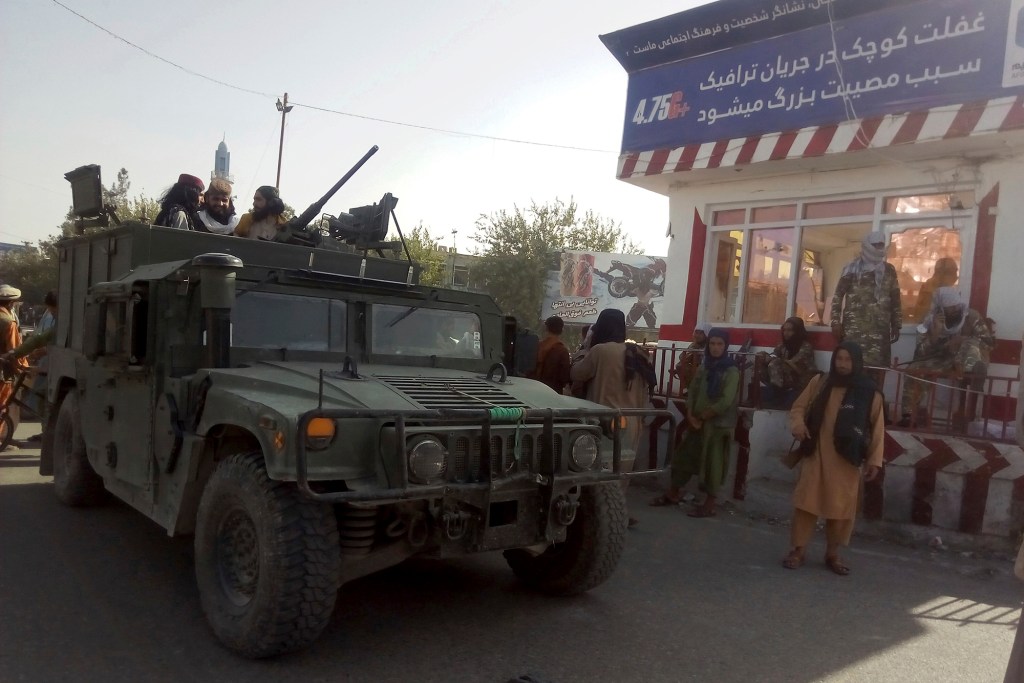 That was in 2013, so we’re getting close to five decades and Biden is still wrong. This blunder seems destined to be his worst decision ever because he made it as commander in chief.

Absent a miracle, one where the Taliban do not engage in wholesale bloodletting, the results in Afghanistan likely will define Biden as a president who went wobbly in a war and betrayed our allies and our cause.

In a Wall Street Journal op-ed, H.R. McMaster and Bradley Bowman write that “Pundits in Washington repeat the mantra that there was ‘no military solution’ in Afghanistan. The Taliban seem to have come up with one.”

They couldn’t have done it without Joe Biden.