Where to begin? This seems to be the question on everyone’s mind. So much happened over the course of that 120 minutes, well probably closer to 140 or even 150 minutes with all the stoppage time, that no one seems to know what to discuss first. In this case, let’s start at the beginning.

The USMNT concedes in the 2′. Really it was about, what 65 seconds in? An error at the back, Mexico capitalize and the “here we go again,” thoughts come rushing in. Then about 20 minutes later, when Mexico puts the ball in the back for the second time, it really did seem over.

Stay behind this team. This is far from over.

But wait! Thank God for VAR! Never thought those words would be written! Fortunately for the US, it was a wake-up call. Just a few minutes later, Gio Reyna equalized off the rebound of Weston McKennie’s header off Christian Pulisic corner kick. A goal made from young USMNT superstars. And just like that, game on!

The end of the first half saw Zack Steffen make some huge saves to keep the score level. Everything indicates Mexico is on the verge of pulling ahead, but it does not come to be. The arrival of half time provides a chance for fans of both teams to breathe and regroup.

The start of the second half saw the first of three THREE scuffles. Then one of the saddest movements of the match, Steffen after having a remarkable performance, goes down with a non-contact knee injury. After trying to continue, he is helped off the pitch and Ethan Horvath comes on.

In the 75′, two balls ended up on the pitch and as only Concacaf will do, play continues. Not long after Mexico scores their second goal of the night to pull ahead of the USMNT for the second time. In the 81′ Mexico concedes a foolish corner to the USMNT. McKennie fires his header home. Just like that, it is level once again.

The last 10-15 minutes of regular time saw the start of utter chaos. Horvath produces massive saves and keeps the score level. Around the 90+2′ all hell breaks loose. Mexico’s Hector Herrera fouls Horvath in the box. Both teams get angry and tempers flare. Somehow, Herrera manages to escape a red card after choking McKennie in an event reminiscent of the 2019 Gold Cup final. That detail was, of course, noticed by USMNT Twitter.

Following the freekick after the foul on Horvath, El Tri supporters use a homophobic slur in their chant. This forces the match to pause and enter anti-discrimination protocol. Once the match restarts, there are some desperate shots but neither team scores. Regular time ends and the match moves into extra time.

The first half of extra time provides several close scoring chances for Mexico. Horvath is up for the challenges and manages to keep the score level at 2-2. First half extra time ends with a lot of built up tension and a promise of more fireworks to come.

Enter second half extra time! Pulisic is brought down in the box. However, no foul is given. Enter VAR part 2! After the check, the penalty is given! Tata Martino also gets a red card for touching the referee during said check. Meanwhile, back at the penalty spot, Pulisic is ready. At the whistle, Pulisic calmly places his kick “top-bins” and the USMNT leads 3-2.

The celebration at the corner flag, in front of the Mexican fans, ends poorly when Reyna gets hit in the head with a projectile from the stands. The young winger needs help to his feet and is examined for a concussion.

Shortly after the re-start, VAR intervenes yet again after a potential handball by the USMNT in the box. VAR gives the penalty to Mexico providing the opportunity to level the match once again. However, Horvath has other plans. Up for the challenge, he produces one of, if not the, biggest moment of the match, saving the penalty.

Next up: scuffle number three. In the dying minutes of the match, Pulisic takes the ball into the corner, where he is fouled. The thrid scuffle ensues. Meanwhile the Mexican fans throw more projectiles at the players, this time catching their own player in the head. After the restart, the final few minutes play out rather uneventfully. The USMNT are declared winners of the inagural Concacaf Nations League!

An Instant Classic and a Trophy

This match will go down as a classic. How could it not? It is one of the most entertaining and dramatic matches in this historic Concacaf rivalry. The memories of this match will live on for many many years. As will this image. The future of the USMNT no more. They are the present and they mean business. Seriously this image needs to hang on the wall of Soccer House. 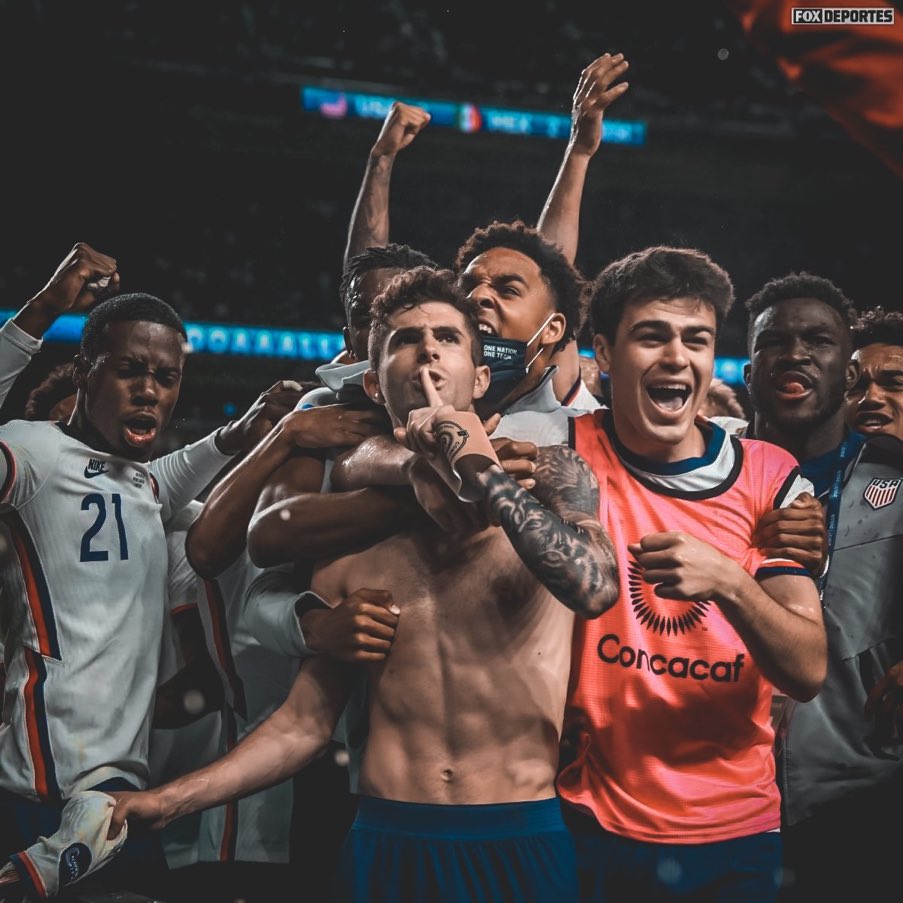 Winning this match, of course, provided this young USMNT squad with their first trophy. Having coming into camp with winners medals galore from highly successful individual seasons in Europe, this group was able to take that energy and win as a collective. They are a special group, and they are just getting started.

The players in this match stepped up for the USMNT. They won with heart and fight. Their desire to win was greater and it paid off with the victory. The match was not the prettiest game of footballer ever played, in fact it was far from it. Yesterday, it was individuals performing together and fighting together and for each other.

Everyone knows about the heroics of Horvath, the penalty goal by Pulisic, Reyna’s unstoppable movement and McKennie’s Man of the Match performance. However, there were several others that put in incredible shifts that have not gotten as much attention. Without these guys, there is no Concacaf Nations League title for the USMNT.

Lost in Ethan Horvath’s phenomenal substitute appearance, is the work of Zack Steffen. Prior to his knee injury, he was rock solid at the back. He came up big a few times to deny Mexico certain goals. Additionally, his calmness playing out of the back allowed for him to hit some ridiculous passes up field to the likes of Josh Sargent, Pulisic and McKennie. While Steffen’s calmness at the back is extremely nerve-racking to watch, it is so important. Despite not starting every match, Steffen has grown a lot as a keeper this past year. His increased skill was on full display in a wonderful performance last night.

Ffs please stop acting like you’re playing for Guardiola. ONLY ONE OF YOU PLAYS FOR HIM! And you’re not playing for him right now ZACKARY! Leave your Ederson traits in MCR please and thank you

It is no secret Josh has had a rough two seasons with Werder Bremen. However, those past two seasons taught him how to defend, how to run for his teammates and, most importantly, how to grind. Sargent was everywhere last night. He was running in behind Mexico’s defense, dropping back into midfield to connect play, holding off defenders like it was nothing. He was close to scoring or assisting multiple times, only missing by inches, saves, overhit passes or the lack of a runner for the cutback. It was type of performance that shows why Sargent is being sought after by so many Bundesliga clubs.

Mark McKenzie came under a lot of fire after his early error. What he did not do, was let the error define his night. Despite the error and a few other nervous moments, McKenzie had a solid match. He got stuck in and was not afraid to foul should he need to. Playing in a final against Mexico is never easy, let alone as a young player with very few international caps. He grew into the match and put in crucial blocks and tackles. McKenzie showed a lot of promise last night, and he will absolutely be a crucial player in the USMNT going forward.

Having come into the match as a substitute, for fullback Sergiño Dest, Weah made an instant impact. Taking over for Dest as a left-sided midfielder (Tim Ream was playing left-back at this point), Weah provided a spark. He allowed McKennie to roam more freely and opened up space for Pulisic to run and dribble. Defensively Weah was solid too. Additionally, Weah’s passion and heart were evident throughout his time on the pitch. He lead by example and fought hard. 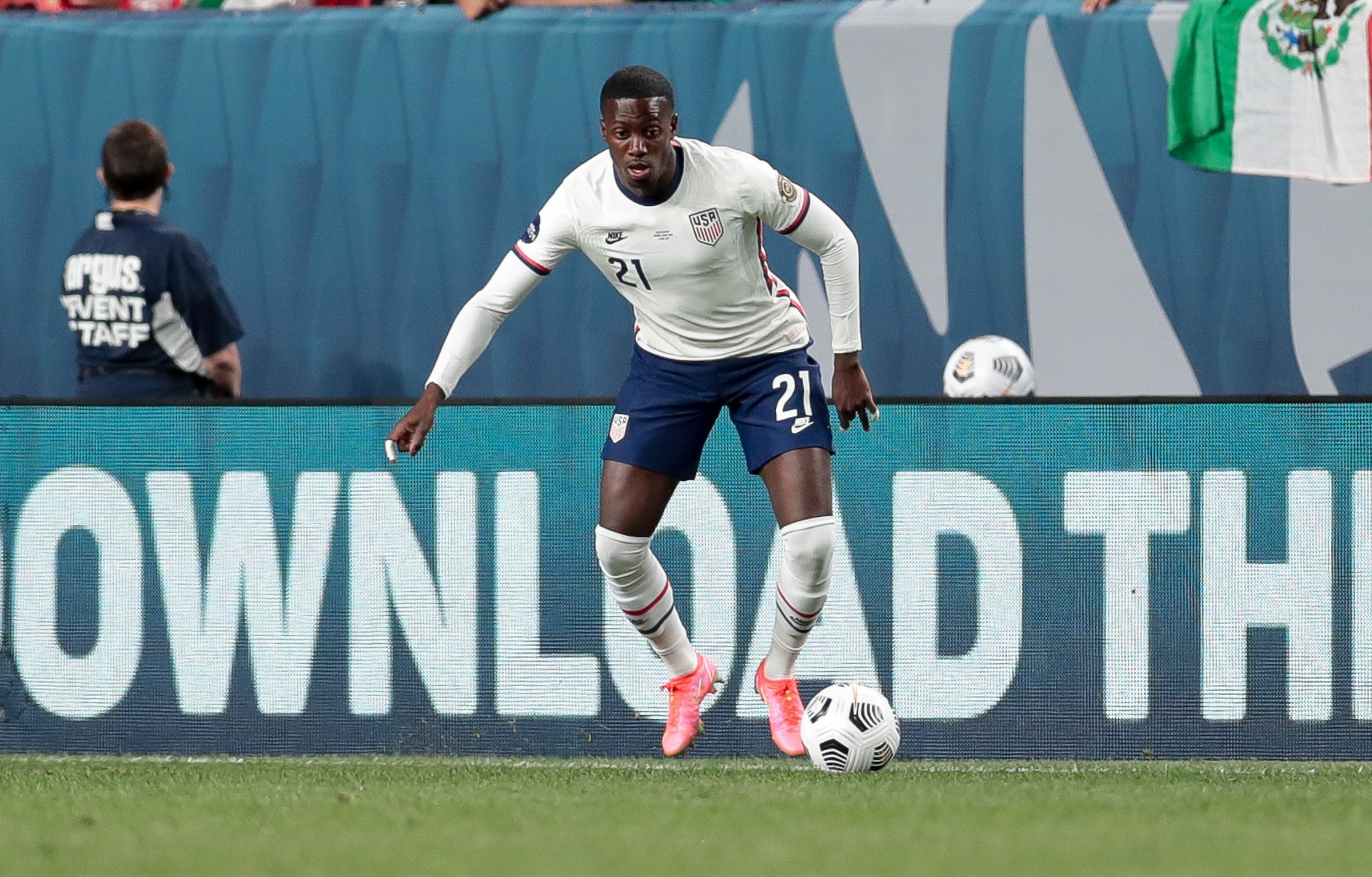 A player many were skeptical of, Acosta stepped up in a big way in this match. He was solid defensively and adapted well to playing as a left-back. He did well to keep advancing play while also making sure to provide defensive cover. While much of his work went under the radar on the initial watch, upon a second viewing his efforts are quite noticable.

The Too High Expectation Crew

As the recognized best center back in the USMNT pool, there was a lot of pressure on John Brooks to deliver. He was tasked with being the defensive key for the US. As a World Cup veteran, he was expected to be a leader. Brooks managed to fill both roles. He helped keep the USMNT’s backline organized. He was aggressive and physical, making Mexico feel his presence on the pitch. In the attack, his passes helped unlock the Mexican defense repeatedly. He started beautiful sequences multiple times, finding Sargent, Weah, Pulisic, McKennie and others far up the pitch. Brooks’s strong performance has, unfortunately, been left out of much of the conversation. It is time to acknowledge how good he was. 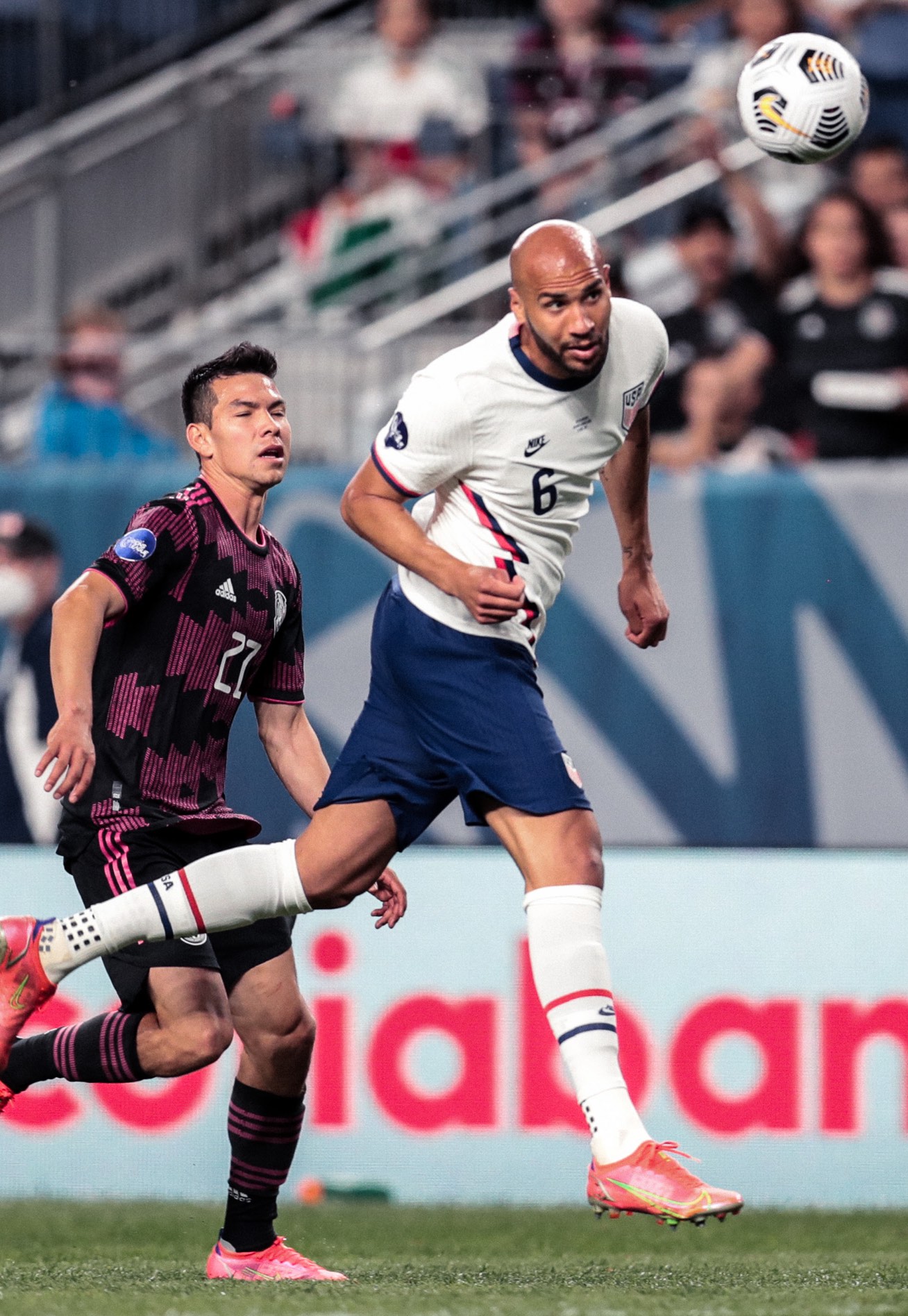 Tyler Adams is another player coming into the match expected to perform at a very high level. When he finally came into the match, he was an instant defensive force. He shifted the balance of the midfield and was extremely hard for Mexico to play through. Adams was getting stuck in. He hardly put a foot wrong the entrire time he was on the pitch. Desptie only being 21, he played like an established veteran. It was easy to forget Adams had never played a competivie match against Mexico. Similarly to Brooks, Adams was expected to make the imapct he did, which has lead to him being left out of the player conversation.

There is only one way to end this, joy. Last night came from a dream. A dream that the young players on the pitch last night have had since they were small and a dream fans have had watching these players come of age. It was the realization of a long road of rebuilding and believing in the potential of youth. It was the complete opposite of that night in Couva, that tragic night that defined this USMNT for years. That night defines this team no longer.

This team is defined by last night. Last night where they fought with every ounce of strength they had. Last night where they had each other’s backs and played like they just wanted that trophy more. They supported each other and played as one. Something that, until last night, hadn’t been evident. For the first time, this group looked like 23 players operating as one. 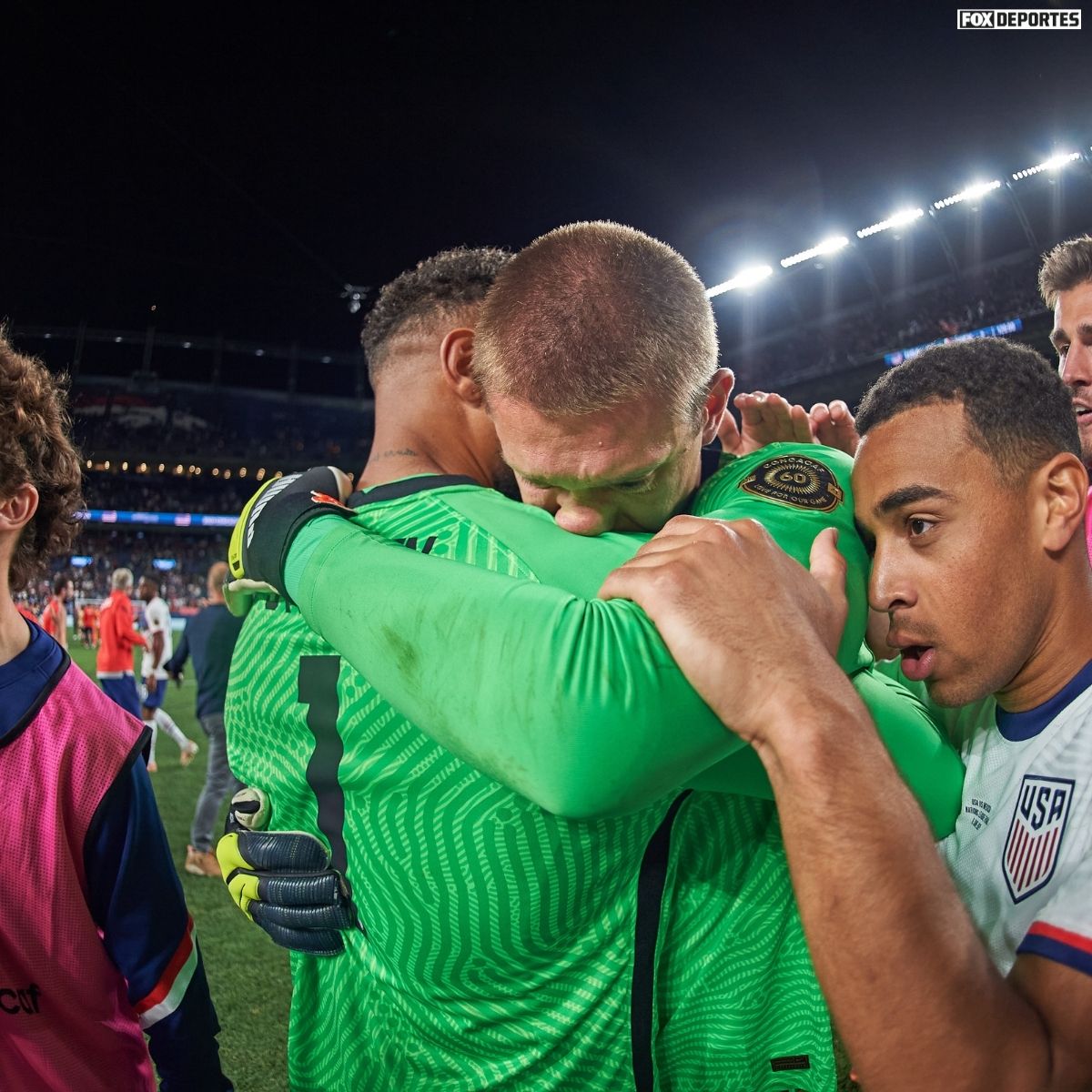 This is one of my favorite photos. Instead of being upset he had to come off and sulking, Steffen hobbled straight to Horvath and hugged him.

This USMNT is not afraid. They know their ability and are, perhaps, naïve enough to believe they can beat anyone if they fight hard enough. They have confidence that at times borders cockiness, but they are also grounded. And last night? Last night they announced themselves to the world, showing everything they are capable of.

A Few More Pictures Because We Love It 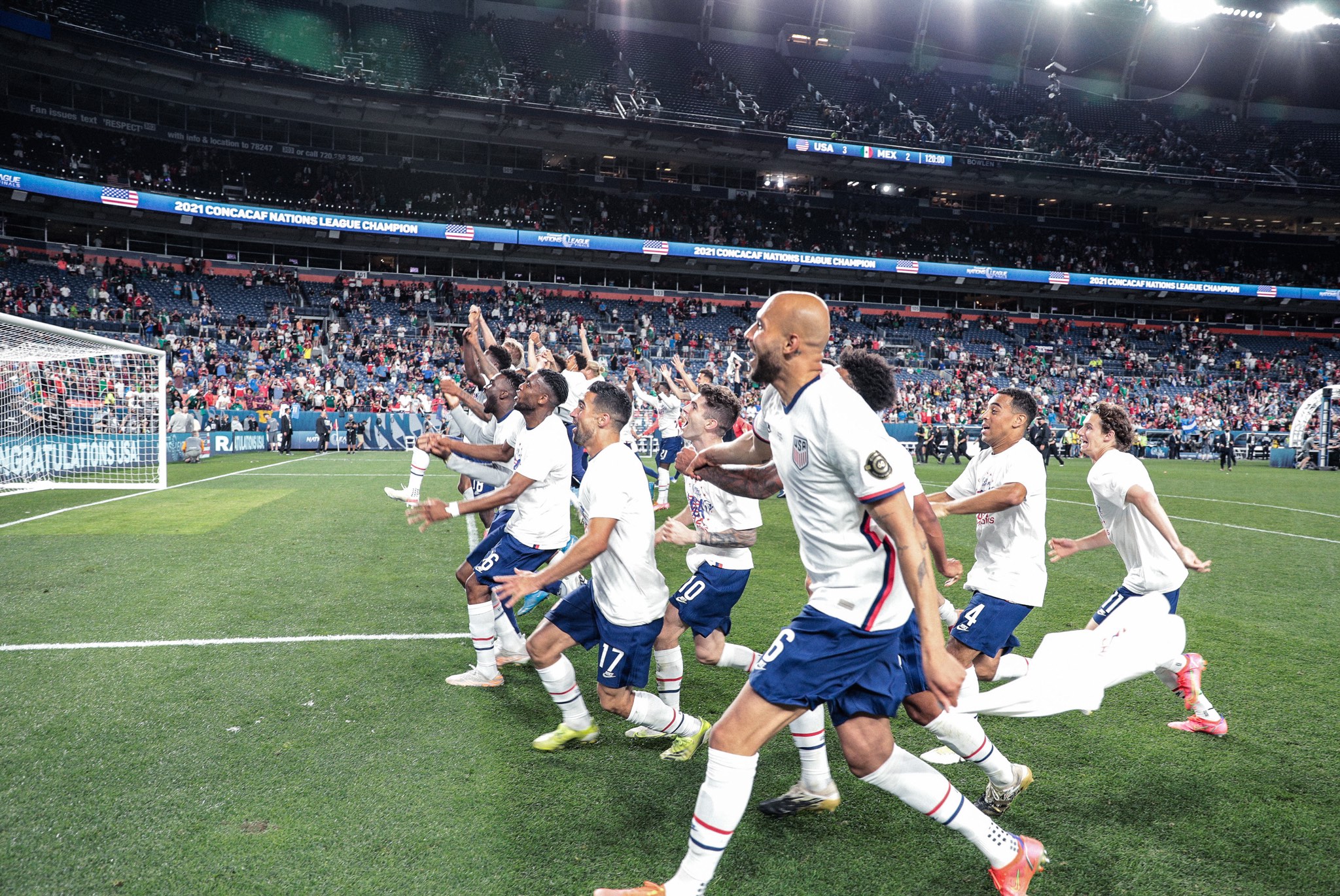 Celebrating with The American Outlaws 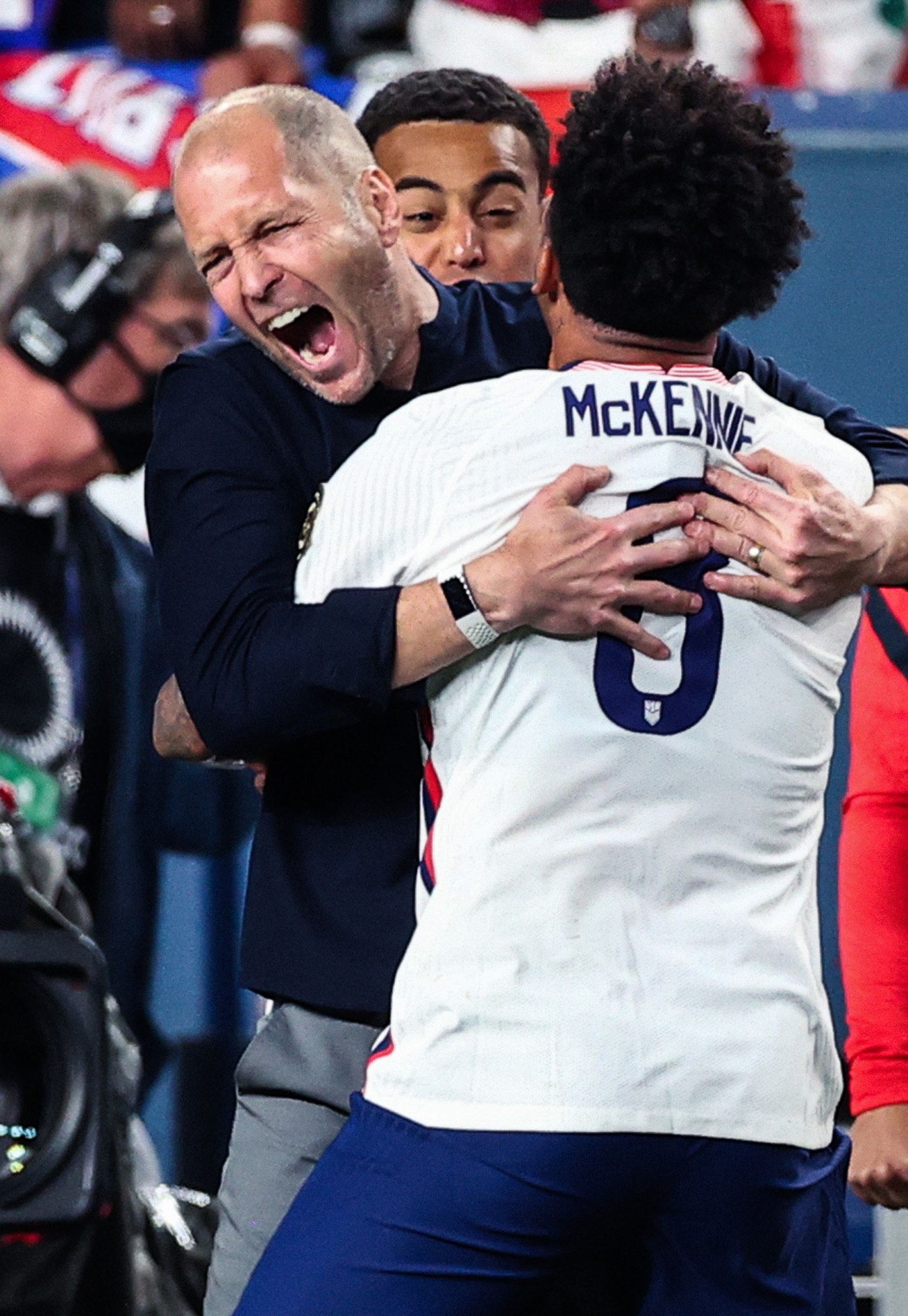 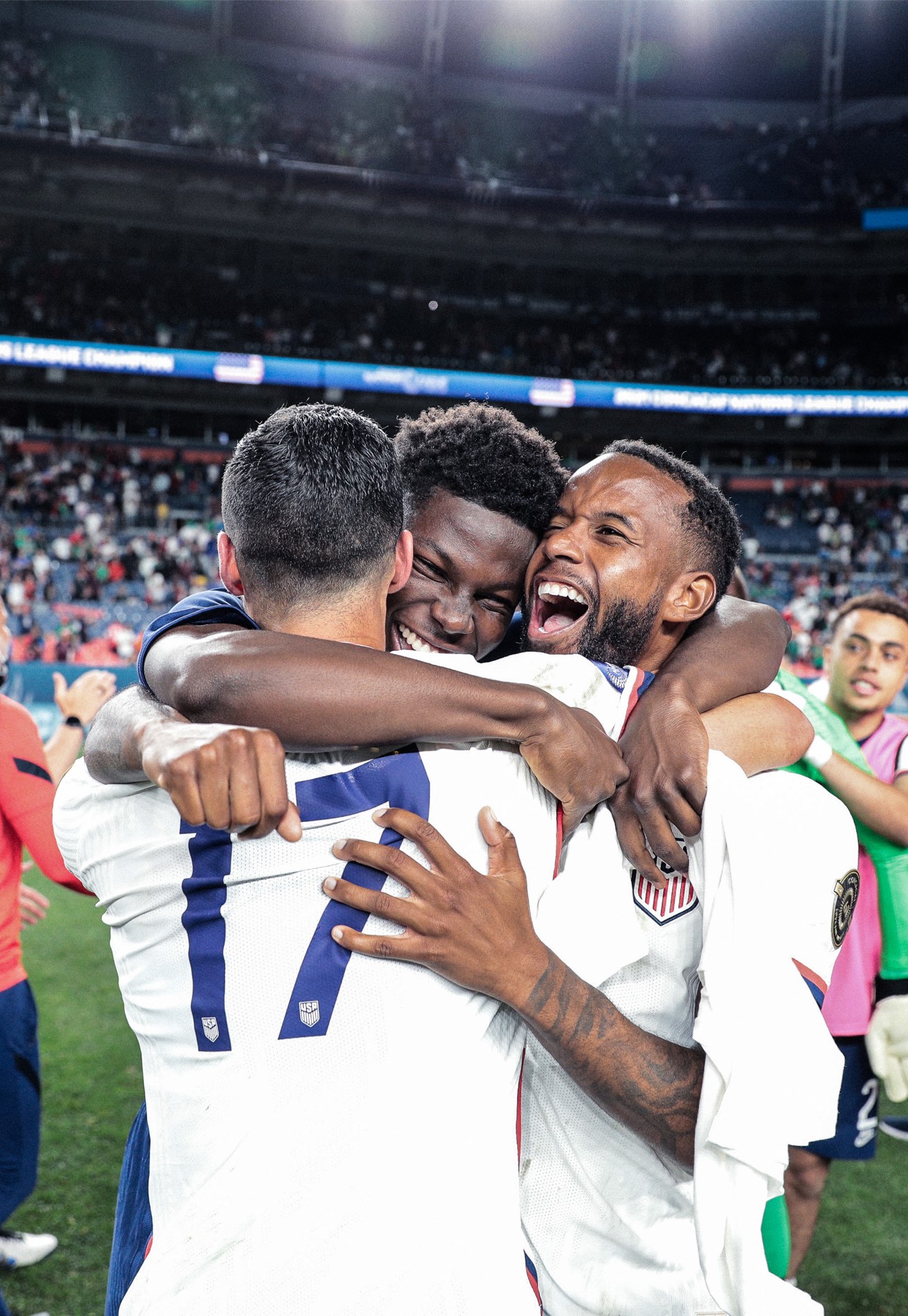