President Biden admitted Monday that the fall of Afghanistan to the Taliban happened “more quickly than we anticipated,” but added that “I stand squarely behind my decision” to order the vast majority of US forces out of the country — stopping short of acknowledging the bungled exit strategy that led to the Western-backed government’s chaotic collapse over the weekend.

In his first remarks on the deteriorating situation since Tuesday — when he told reporters Afghan security forces had to “fight for themselves, fight for their nation” — the president laid blame for the national humiliation largely at the feet of his predecessor former President Donald Trump as well as the Afghan forces supported by billions of taxpayer dollars worth of materiel.

“When I came into office, I inherited a deal that President Trump negotiated with the Taliban,” Biden said. “Under his agreement, US forces would be out of Afghanistan by May 1, 2021 … US forces had already drawn down during the Trump administration from roughly 15,500 American forces to 2,500 troops in the country, and the Taliban was at its strongest militarily since 2001.

Biden then rounded on Afghanistan’s political and military leaders, including overthrown President Ashraf Ghani, who he said “gave up and fled the country” as the Taliban conquered provincial capitals in bunches day by day over the past week.

“The Afghan military collapsed, sometimes without trying to fight,” the president went on. “If anything, the developments of the past week reinforce that ending US military involvement in Afghanistan now was the right decision. 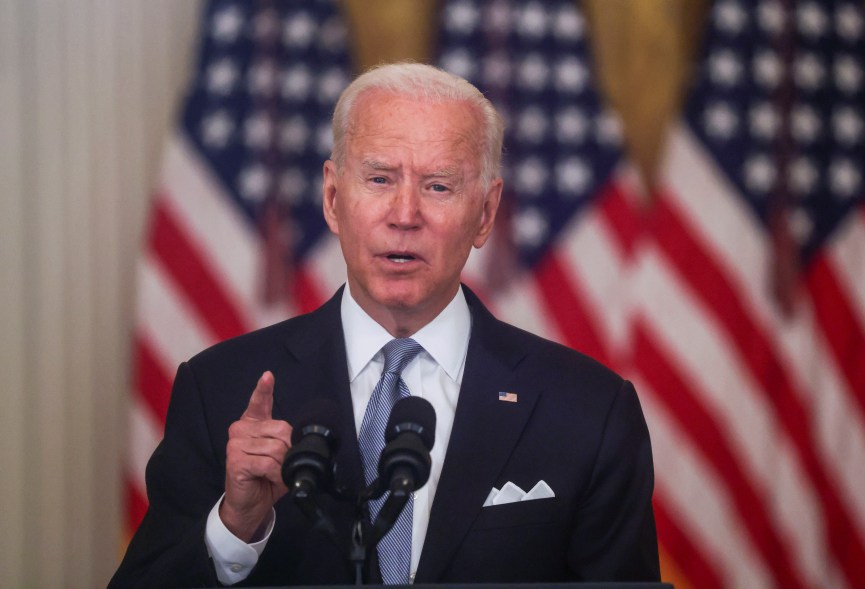 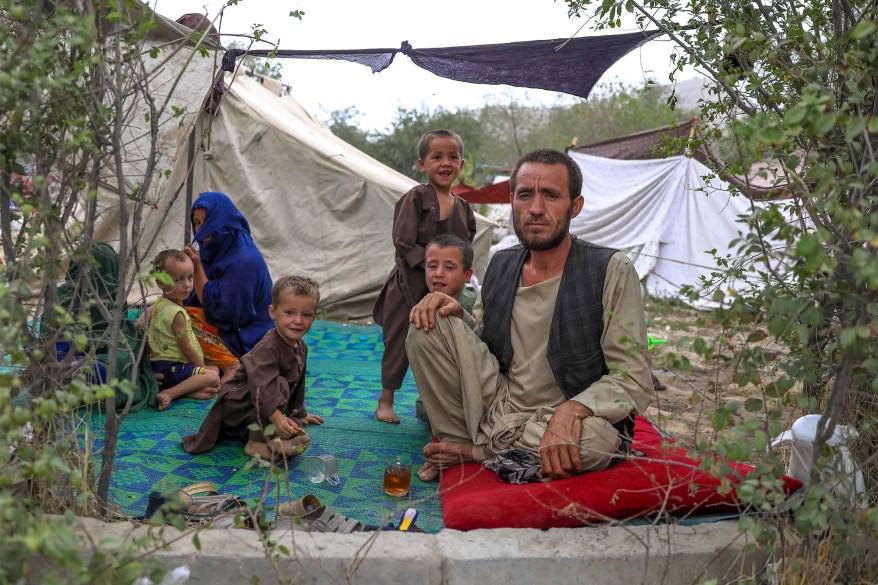 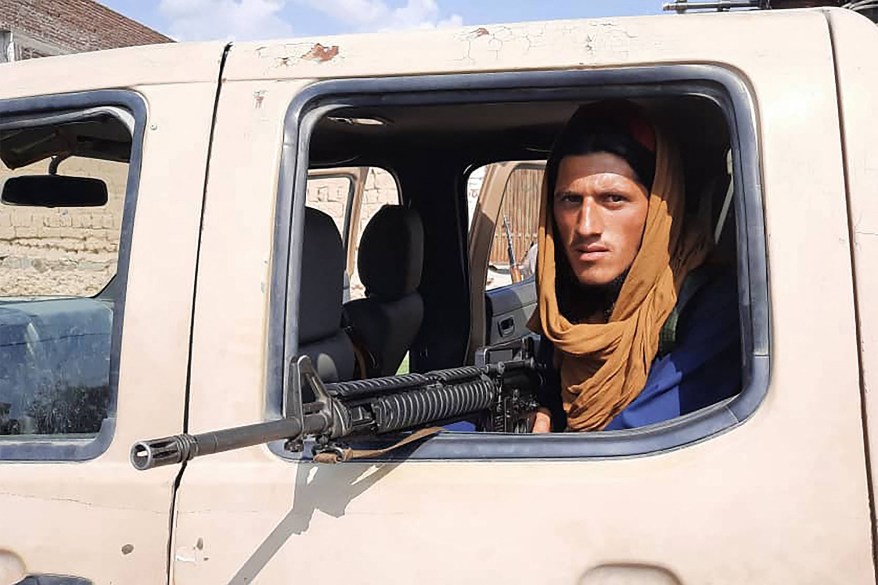 “American troops can not, and should not, be fighting in a war — and dying in a war — that Afghan forces are not willing to fight for themselves.”

As the president spoke, thousands of US troops were racing to evacuate diplomats and personnel from Kabul after Taliban fighters in a lightning offensive took over the capital city on Sunday.

Chaos reigned at the capital’s international airport as Afghan civilians chased a US Air Force plane along the tarmac, even clinging to the aircraft as it took off in a desperate attempt to escape the Taliban.

Video showed two men falling from the plane as it rose from the runway. Other reports described how the numbers of people clogging the tarmac prevented other evacuation flights from taking off or landing.

The horrifying images have caused outrage among lawmakers from both parties, who had urged the administration for months to make provisions to evacuate thousands of Afghans who assisted US forces over the previous two decades and who are marked for death by the avenging Taliban.

Biden said Monday that he had authorized the deployment of 6,000 US forces to assist in getting Americans and other allied personnel — including “our Afghan allies and multiple Afghans” — out of Afghanistan.

The president added that 2,000 Afghans and their families who were eligible for so-called Special Immigration Visas (SIVs) had been moved to the United States since July. However, many thousands more are believed to be in danger of being left behind with the Taliban closing in.

Biden insisted Monday that some Afghans eligible for SIVs “did not want to leave” because they were “still hopeful for their country.” He also claimed that the since-fallen government “discouraged us from organizing a mass exodus to avoid triggering, as they said, a crisis of confidence.”

The president then vowed a “swift and forceful” response if the Taliban interfered with the US military’s evacuation operation at the airport.

With the work of twenty years of American blood and treasure undone in a few short weeks, Biden said the focus of US policy regarding Afghanistan would turn to “what is possible”.

Biden initially announced in April that all combat forces would be out of Afghanistan by Sept. 11 — the 20th anniversary of the devastating terror attacks that precipitated the US invasion of that country two decades ago and the toppling of the Taliban government. That deadline was eventually moved up to the end of August. 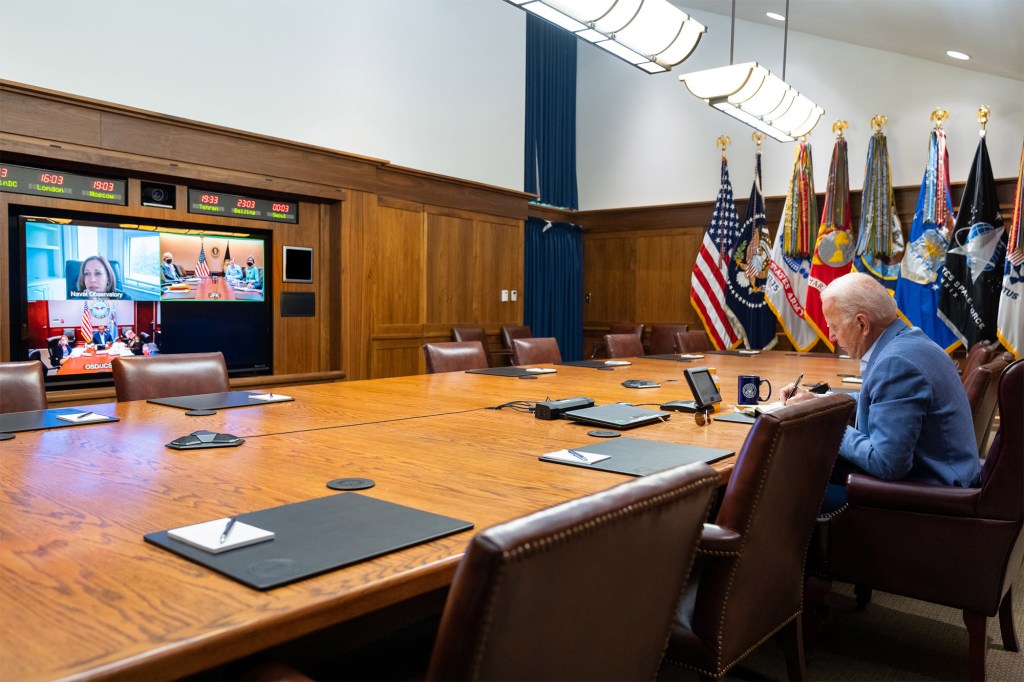 President Biden is cutting short his vacation to address the fall of Afghanistan to the Taliban.Getty Images

Since the first American bombs fell in Afghanistan on Oct. 7, 2001, more than 2,300 US military members have died and more than 20,000 have been wounded in America’s longest war.

On Monday, Biden recalled urging Ghani and another top Afghan official, Abdullah Abdullah, to “engage in diplomacy, to seek a political settlement with the Taliban” when the three met in person at the White House in June.

“This advice was flatly refused,” Biden said. “Mr. Ghani insisted the Afghan forces would fight, but obviously he was wrong. So I’m left again to ask those who argued that we should stay: How many more generations of America’s daughters and sons would you have me send to fight Afghanistan’s civil war if Afghan troops will not? How many American lives is it worth? How many endless rows of headstones at Arlington National Cemetery? I’m clear in my answer. I will not repeat the mistakes we made in the past.”

While top administration officials — Secretary of State Antony Blinken, Defense Secretary Lloyd Austin and Chairman of the Joint Chiefs of Staff Mark Milley — briefed lawmakers about the situation unfolding in Afghanistan on Sunday, the president did not speak publicly.

The White House tweeted a photo Sunday showing Biden sitting by himself at a desk in Camp David while getting updates from his national security team.

Attempts to reach White House press secretary Jen Psaki were greeted with an “out of office” message saying she would not be back from vacation until Aug. 22.

Psaki did however comment on the president’s remarks on Twitter, writing, “@potus made clear that he will not ask Americans to fight and and [sic] die in a war that the Afghan military is not willing to fight for itself.”

When he was done speaking, Biden left the East Room of the White House without responding to any of the shouted questions from the press. Less than an hour later, the president boarded a helicopter that would return him to Camp David, where he is scheduled to remain until Wednesday.