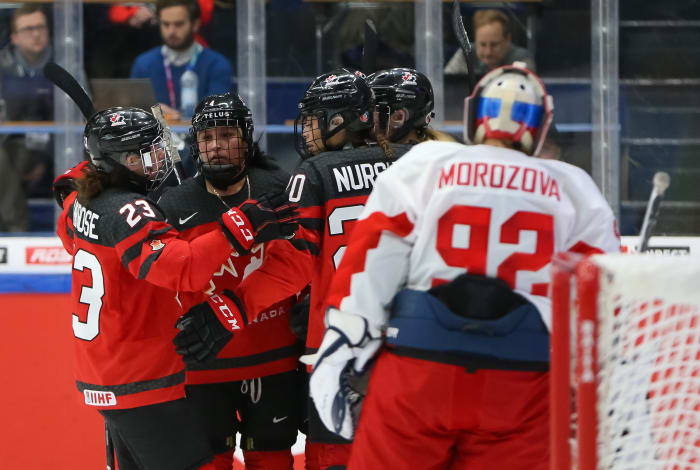 It’s easy to call the women’s World Championship happening now in Calgary a warmup event for the Winter Olympics. It is just over 160 days away, after all.

But that’s not how Team Canada views it. They’re focused on regaining the title as the top team in the world after only taking home bronze back in 2019, the last time the top women’s players met up internationally.

It feels like ages ago. Since that event, the world was changed forever due to the COVID-19 pandemic, and women’s hockey largely was forced on the sidelines. The world championship was supposed to take part in Halifax, N.S. back in the spring, but with rising COVID-19 numbers in the province, the tournament was forced on the backburner.

Usually, teams would use the tournament as a chance to make final roster decisions ahead of the Olympic centralization. But with the later start this year, Canada’s centralization roster was already announced, with 28 players getting named to the team back in May. The roster in Calgary features 22 players that’ll join the centralization program, with Ashton Bell, Meaghan Mikkelson and Micah Zandee-Hart being the ones left off.

The Olympics will always be so important to the players, but that’s not the focus right now. That’s a future problem. Winning gold on home ice is what’s important right now.

“There’s a lot of steps before that comes, and with this World Championship, we know we have an opportunity here to bring home a gold medal and to keep it on home soil,” defenseman Erin Ambrose said.

“I think that that’s going to be the most important thing – that we continue to take it game by game and really focus on this world championship.”

Canada once again should factor into championship contention, although they’ll have to topple the always red-hot American team.

Canada still holds the record with 10 gold medals at the event, but USA has won eight of the past 10 events since the 2006 Olympic games. Canada’s women’s team is a proud group that expects gold every year, but, including the Olympics, Canada hasn’t done that since 2014, and hasn’t done so at the World Championship level since 2012.

That’s why gold now is important.

“I think it would be a bit of a knock against a world championship to fully consider it a tune-up,” coach Troy Ryan said. “We’re here to win a World Championship. That’s first and foremost, that’s our priority.”

Ryan said the team will focus on centralization on Sept. 1, shortly after the tournament ends in Calgary. The city will be home to the team leading up to China’s Olympic Games in February, where Canada will once again look for a medal – but a more valuable color, this time.’

There has been rumblings of a World Championship event for women in 2022 in addition to the Olympics – the Olympics have served as the World Championship in the past – which means international play is about to get ramped up to a whole new level in the next bit. But the opportunity for any player can end at any time. An injury or poor play could prevent Olympic participation, so the focus has to be on the current even.

“Just standing on the blue line and watching the opening video when they said the world championship is open, to be honest it gave me shivers,” Marie-Philip Poulin said after Canada’s opening victory against Finland. “We have been waiting for that moment for a long time. We’re very excited; it was not the start we wanted, but we responded well.

“It’s hard to put into words, but putting on the jersey for an international game was very special.”

And of course, just being in Calgary, representing their country, is important to the 25 women who have otherwise had to wait their turn to play internationally while other groups have barely missed a beat.

“We’ve worked so hard to practice but at the end of the day, what all the athletes here want to do is compete and to be able to wear that jersey and represent their country,” defenseman Renata Fast said.

The drive for gold is underway, and Canada hopes to show once again why they’re world leaders in the sport.