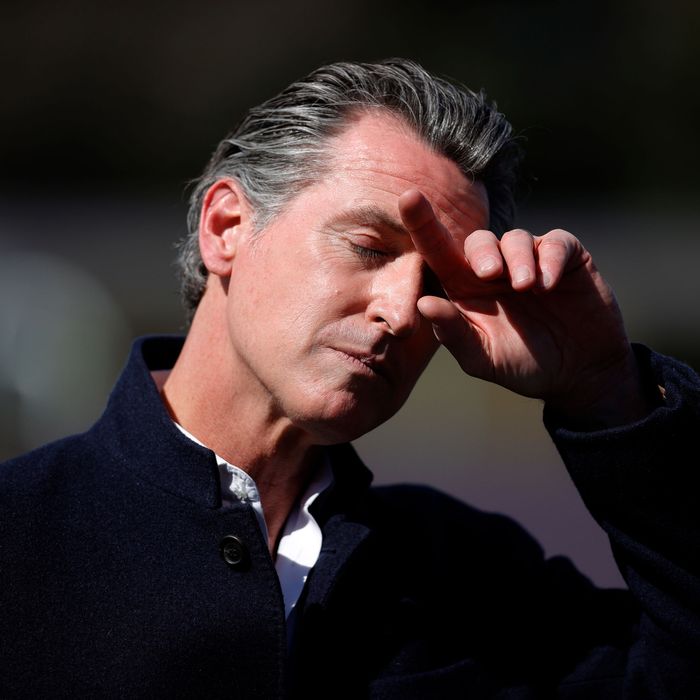 The summer is heating up for Gavin Newsom.
Photo: Justin Sullivan/Getty Images

The standard narrative for the September 14 recall election that could cut short California governor Gavin Newsom’s tenure has been that the state’s heavily Democratic tilt and currently upbeat environment (based on positive COVID-19 and economic trends) will save him, despite his middling popularity. Amid darkening clouds on the COVID-19 front, a new Berkeley IGS survey deploying a strict likely voter screen shows Newsom in some trouble, unless Democrats become more interested in voting during the next seven weeks. Among the voters “most likely” to participate in the election, 47 percent favor giving the incumbent the boot while 50 percent are opposed. Among registered voters, by contrast, only 36 percent support recalling Newsom while 51 percent are opposed.

According to the pollsters, complacency among Democrats is an issue: “When asked whether or not they think Newsom will defeat the recall, Democrats expect him to do so by a huge 70 percent to 8 percent margin. By contrast, Republican voters are far more likely to believe that Newsom will be voted out of office, with 53 percent holding to this view, and just 21 percent expecting him to survive the recall.”

As September 14 approaches, another factor boosting relative Republican turnout could be the exclusively Republican cast of major candidates running to replace Newsom if he is recalled (the ballot will offer just two questions: Should Newsom be removed from office, and if so, who should replace him?). With Democrats implicitly expected to boycott the replacement contest, the question is, how many will bother to turn out to defend Newsom?

Team Newsom and his Democratic allies have stuck to a strictly partisan message in fighting the recall. One ad compares the recall drive to the January 6 Capitol riot and its proponents to the Republican sponsors of voter-suppression legislation around the country:

While recall opponents are urging California Democrats to, in effect, “stop the steal” of the governorship, proponents (including the replacement candidates) are exploiting California Republicans’ convictions that their once-proud state is becoming a dystopian hellscape characterized by high taxes, homelessness, and capital flight. So one question is whether hostility to the GOP will match existential despair as a turnout strategy.

Unfortunately for Newsom, early-summer optimism about COVID-19 is fading in California as much as anywhere in the country. It didn’t help that Los Angeles County was the first major jurisdiction in America to reimpose a universal indoor-masking requirement, based on a surge in COVID-19 cases and concerns that the Delta variant could soon overwhelm the defenses of even the fully vaccinated. Some of the anger toward Newsom stems from the belief of conservatives (and many small business owners) that he has been overzealous and/or incompetent in imposing public-health measures during the pandemic that unnecessarily damaged the state’s economy. You have to figure the governor will avoid statewide lockdown measures or even a mandatory masking edict as long as he can, though he is already biting the bullet by requiring vaccination (or regular COVID-19 tests) for state employees and many public and private health-care workers.

Those on both sides of the recall battle will be watching public-health indicators closely between now and September 14, along with any evidence that the economic and state revenue boom that looked so promising is abating. But Newsom is on treacherous ground. The news that he has removed two of his kids from a summer camp where photos emerged of maskless indoor activities is reminding Californians of the governor’s very damaging December 2020 lapse, by attending a birthday dinner for a wealthy lobbyist at one of the world’s most exclusive restaurants, in violation of his own COVID-19 regulations:

This is in clear violation of his own mask mandates. Why can his kid be maskless, but not ours?

Newsom’s dog days of peril are full of pitfalls. If wildfire incidents and horrific weather persist, do they add to the “California is dying” sentiment or reinforce Democratic talking points about climate change and the need for activist government? That’s unclear. But it is clear that Newsom is no longer floating toward a September 14 validation that will serve as a springboard to an easy 2022 reelection to a second full term. He and his allies may have to stop ignoring the replacement contest and go negative on some of his would-be successors. The Berkeley IGS poll showed a very high undecided percentage (40 percent) on a Newsom replacement among the most likely voters, with talk-show host Larry Elder (who had to go to court to get on the ballot) leading fellow Republicans Kevin Faulconer, John Cox, Kevin Kiley, Doug Ose, and Caitlyn Jenner — but with only 18 percent of the vote. As the recall election heats up, Democrats may need to wake up their voters.