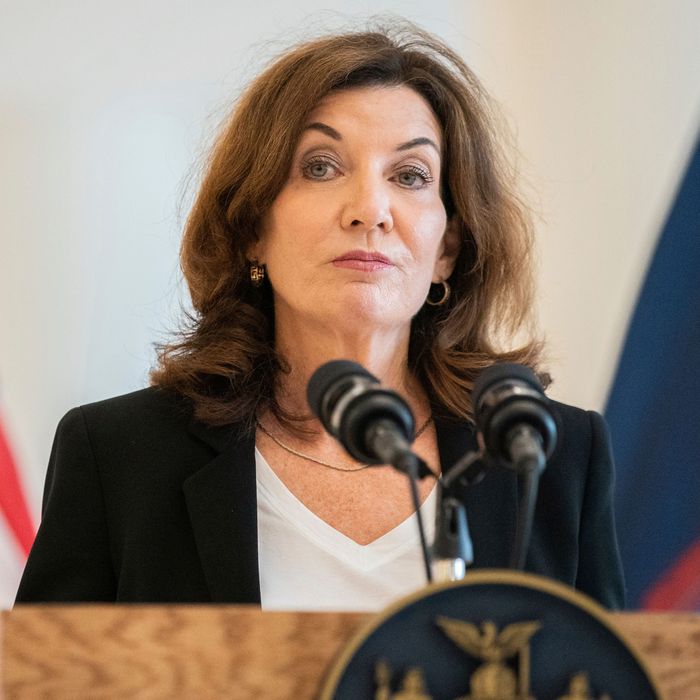 Lieutenant Governor Kathy Hochul just made history by becoming New York’s first female governor, but most of the state wasn’t awake to witness it.
That’s because Andrew Cuomo officially left office at 11:59 p.m., with Hochul sworn into office just after midnight in a private ceremony conducted by the state’s chief judge, Janet DiFiore. A ceremonial swearing-in will take place at the Capitol at 10 a.m. on Tuesday.

The late-night ascension seems to be another quirk of Cuomo’s decision to remain in office for two weeks, after announcing his resignation in the wake of the state attorney general’s investigation, which found he sexually harassed 11 women, in and out of state government. (Cuomo denies any wrongdoing.)

In her first press conference after Cuomo’s announcement, Hochul said the 14-day delay to the beginning of her term was “not what I asked for,” but that she was looking forward to the “smooth transition” that he promised. On Monday, Hochul announced that she will appoint Karen Persichilli Keogh to secretary to the governor and Elizabeth Fine as the governor’s counsel, which places women in the three most powerful positions of the executive branch.

However, in the waning days of his decade-long tenure as governor, Cuomo seemed determined to soak up the last few hours of limelight. As Hurricane Henri barreled toward Long Island, he took the lead at a storm briefing the day before, providing updates and warning residents about potential flooding.

When asked why he was heading up storm preparation instead of Hochul, who would be be left to deal with the aftermath and cleanup from the storm in her first days succeeding him, Cuomo offered a blunt answer.

“I am governor today, and I am in charge,” he said.

Hochul was still not in attendance at a subsequent storm briefing on Sunday. Cuomo insisted that his team was keeping her informed on Henri which, by that point, had been downgraded to a tropical storm.

“The lieutenant governor has been briefed on all of this and we’re in constant communication,” he said.

He also confirmed that he would still be leaving the governor’s office on the same day he planned.

“Yes, my final day is tomorrow — Tuesday morning,” Cuomo said. The outgoing governor was busy in his final hours in office, granting six acts of clemency (including a commuted sentence for a Weather Underground member who is the father of the San Francisco district attorney); defending himself against reports that he was trying to ditch his dog; and finally getting around to submitting his resignation letter.