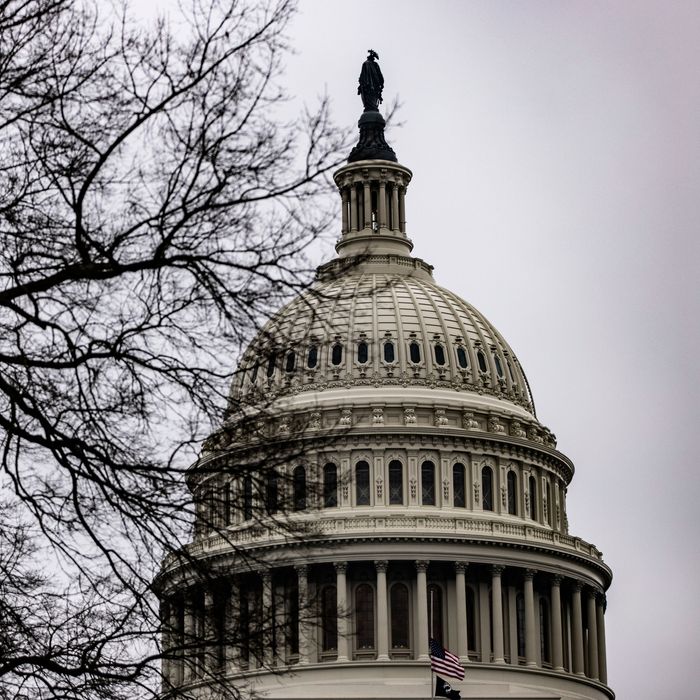 Multiple sources are reporting that a deal has been reached on a bipartisan infrastructure package that can now proceed to a Senate vote as early as this week. The apparent agreement represents a consummation of a more general understanding involving 10 senators from each party that was announced at a Rose Garden event just over a month ago.

The deal, which has nearly fallen apart at several points in the process, will apparently resolve disputes over the shares of transportation money going to public transit and highways; revenue off-sets to make up for the IRS enforcement provisions Republican vetoed; and a variety of details left out of the earlier handshake agreement. One sticky subject, involving Republicans’ rejection of a requirement that “prevailing (i.e., union) wages” be paid on construction projects, led to the negotiators dropping a $29 billion infrastructure bank provision. So the new funding in the package will drop from the original $579 billion to $550 billion.

An agreement arrives just in time to make it possible that a second motion-to-proceed measure offered by Senate Majority Leader Chuck Schumer (the first was blocked by Republicans last week) will obtain the 60 votes needed to overcome a filibuster, paving the way for full Senate approval by week’s end, or so Politico reports:

As of Wednesday afternoon, nine Senate Republicans involved in the talks said they would move forward and two, Sens. Todd Young (R-Ind.), and Jerry Moran (R-Kan.), said they had not decided. When asked if the bipartisan framework will get the necessary 10 Senate Republican votes, Senate Minority Whip John Thune replied: “I think so.”

Though there may be some grumbling among progressives about the compromises involved in the package and its relationship to the budget legislation next up in the Senate, Schumer is expected to deliver all 50 Democrats to get the infrastructure bill over the necessary procedural hurdles.

But one ominous note was struck by Arizona Senator Kyrsten Sinema, the chief Democratic negotiator on the infrastructure package in an interview with the Arizona Republic:

Sinema, D-Ariz., told The Arizona Republic on Wednesday she had reviewed the Senate Budget Committee’s spending framework and has told Senate leadership and Biden that she supports many of its goals, including job growth and American competitiveness.

“I have also made clear that while I will support beginning this process, I do not support a bill that costs $3.5 trillion — and in the coming months, I will work in good faith to develop this legislation with my colleagues and the administration to strengthen Arizona’s economy and help Arizona’s everyday families get ahead,” Sinema said in a written statement.

This confirms earlier indications that she and her centrist sidekick Joe Manchin will insist on bringing the budget’s price tag down before allowing the reconciliation bill — which incorporates very large chunks of Joe Biden’s 2021 agenda — to pass. But Sinema’s proviso that “I will support beginning this process” and her reference to negotiations over “the coming months” suggests she will vote for the FY 2022 budget resolution which authorizes that $3.5 trillion reconciliation bill. That is likely a condition precedent to House passage of the bipartisan infrastructure bill that is likely to become her signature achievement for years to come, and also a development that Congress will have to take care of before embarking on a planned August recess. So any penny-pinching by Sinema and Manchin will occur down the road, and anticipatory complaints by Alexandria Ocasio-Cortez and others about centrist perfidy may just be warnings not to let the gamesmanship get out of control.