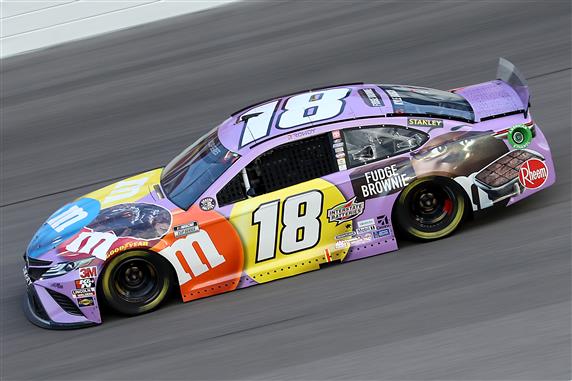 Heating Up For The Summer

Busch, driver of the No. 18 SKITTLES Gummies Toyota Camry for Joe Gibbs Racing (JGR), has posted three consecutive top-three finishes as he comes off a strong third-place run in Skittles colors this past weekend at Road America in Elkhart Lake, Wisconsin. In fact, Busch has posted five top-five finishes in his last seven races, including his second win of the season two weekends ago at Pocono (Pa.) Raceway.

Busch and the SKITTLES Gummies team have found the summer stretch more to their liking as the Las Vegas native continues to jell and grow with first-year crew chief Ben Beshore and a mostly new lineup. The pairing of Busch and Beshore took a huge step forward in the first stop this season at Atlanta, when they were able to overcome a speeding penalty to bring home a fifth-place finish there back in March. The team showed a lot of speed on the 1.54.-mile oval, which they used as a springboard to better finishes, including their first win together at Kansas Speedway in Kansas City in May.

Busch returns to the racetrack this weekend where the winning for him began with JGR in 2008. That was his first year with JGR, and he headed to Atlanta for the fourth Cup Series race of the season aiming to bring home the maiden victory for the team’s two new partners – Mars Wrigley and Toyota. After leading a race-high 173 laps, Busch broke through for the first time in NASCAR’s top series for Toyota, which was in its second year of Cup Series competition and its first year with JGR. Busch added an Atlanta Cup Series win in 2013 to go with seven top-five finishes and 10 top-10s at the 1.54-mile oval during his career.

The two-time Cup Series champion will have SKITTLES onboard for the second week in a row, with SKITTLES Gummies on the Cup Series car for the first time this season, but they did add a win together back in May at Circuit of Americas in Austin, Texas in the NASCAR Xfinity Series race. SKITTLES Gummies are available to fans in stores nationwide.

So, as the Cup Series heads back to Atlanta yet again this weekend, Busch and the SKITTLES Gummies team look to take lessons from their 2008 and 2013 race wins and their top-five finish this past March on the lightning-fast oval and bring home a third Cup Series win at the track. It would be extra sweet – the milestone 60th of Busch’s Cup Series career.