The Los Angeles City Council gave final approval on Wednesday to an ordinance outlawing camping around parks, libraries and other facilities, over objections from critics who said it would punish people for living on the streets.

The measure, approved on a 13-2 vote, had been billed as a more humane way to clear the city’s sidewalks, alleys and open spaces, with outreach teams offering shelter and services to those who are unhoused.

The ordinance now heads to Mayor Eric Garcetti, who previously promised to sign it. Whether it will be heavily enforced — and how long it will take for the city to make progress — is far from clear. 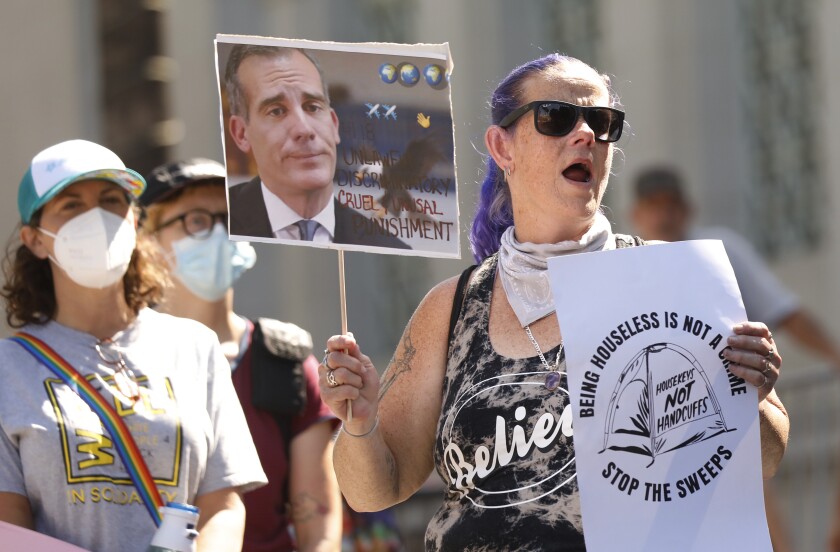 Terrie Klein, who is homeless, joins people gathered for a rally on the steps of Los Angeles City Hall on Wednesday.

The ordinance prohibits sitting, sleeping or storing items on public property near libraries, parks, day-care centers, schools and other locations. But it also states that enforcement in such places cannot occur until the City Council has reviewed a location and given the go-ahead.

Council members have promised that any enforcement would be accompanied by the presence of “street engagement teams” — social workers, mental health specialists and others who would offer shelter and services.

Shortly before the vote, city policy analysts released their proposal for executing that strategy, proposing that 17 outreach teams from the Los Angeles Homeless Services Authority be assigned to the task. Those teams would head out to an area before the City Council votes to prohibit camping in that location, the report said.

Depending on the size of an encampment, the process of providing services and clearing an area could take up to four months, City Administrative Officer Matt Szabo said in his report. General Dogon from Los Angeles Community Action Network speaks to people gathered for a rally on the steps of Los Angeles City Hall.

Once an area has been cleared, outreach workers would return over a period of three months to see if homeless people have returned. If they have, additional outreach would be conducted to “promote voluntary compliance.”

The proposed outreach strategy did not satisfy Councilman Mike Bonin, who voted against the anti-camping law. Bonin, who represents coastal neighborhoods, said the city needs a right to housing, not a mandate that forces people into shelters.

“People want housing,” he said. “They do not want warehousing, they don’t want shelter. They want housing.” Protestors stand in front of vehicles on the intersection of Main and 1st streets in downtown Los Angeles during a rally against the anti-camping law.

Councilman Joe Buscaino, whose district runs from San Pedro north to Watts, called the ordinance a step in the right direction, saying it would ensure that sidewalks are passable, fire hydrants are accessible, and doors and driveways are clear. But he said the city should have gone further.

“I still don’t think this ordinance is enough,” he said in a statement after the vote. “We must still pass a law that says you cannot camp on the sidewalk if you have been offered housing.”

The council’s differing perspectives have caused some to argue that the new ordinance will further politicize the city’s approach to homelessness, with enforcement varying sharply from district to district, depending on a council member’s political views.

Not every location listed in the ordinance would require a council vote. Under the ordinance, city crews would still be permitted to enforce provisions barring people from sitting, sleeping or storing property within two feet of a fire hydrant, five feet of a doorway or 10 feet of a driveway.