I feel privileged to witness the blossoming of these young filmmakers as they thoughtfully use art to convey ideas and principles of empathy, kindness, and community. Working with them gave me a sense of hope for our future. I along, with Angela Staron of ALPLF, and our Judges Panel were constantly heartened as we watched not only the films that ultimately won the contest, but all of the submissions. We even had to disqualify some films because they came from other countries, or were submitted by contestants who didn’t meet other qualifications. But even in those instances we previewed films that telegraphed that some of these young people today will certainly become compassionate leaders of tomorrow.

Winning films will be presented at two red carpet premieres; the first at the EbertFest Film Festival in conjunction with the University of Illinois at Urbana-Champaign, taking place at the Virginia Theater on Saturday, September 11th, 2021. The second premiere takes place at the Shakespeare Theater at The Yard at Navy Pier in Chicago, Illinois on Sunday, September 19th.

The films were judged by a panel of 21 professional film critics who were impressed by the creativity and empathy displayed by the filmmakers. Cash prizes were awarded to first, second and third place winners in each age bracket (11-14, 15-18, 19-21). First places winners received $2,000, second place received $1,000 and third place received $500. Additionally, Illinois schools will use the films, and supplemental curriculum created by educators, to talk about race and the harmful impact of bias and injustice. Below you will find the bios and headshot submitted by each winner, as well as their thoughtful reasons for making each of their films. 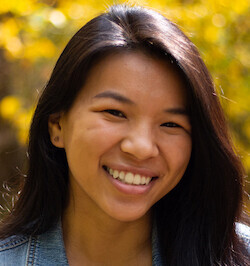 1st place winner for “As We Are Planted”

Anna Lee Ackermann, age 22 (age 21 when her film was finished), is a documentarian and freelance Chicago-based content creator in both visual, audio, and written forms. Through her time pursuing a B.A. in Interdisciplinary Documentary (December ’20) with a dual focus in film and journalism and a minor in Social Media and Digital Strategy at Columbia College Chicago, and serving as an intern at Kartemquin Films, she has sharpened her storytelling skills working on a number of documentaries and professional projects. She now works freelance in the content creation space making videos for small businesses/nonprofits, editing a podcast, and a freelance communications associate. Ackermann recently started a new part-time job as a social media associate for a theater house in Chicago. In her free time, Ackermann enjoys cooking, playing board games, and going skydiving!