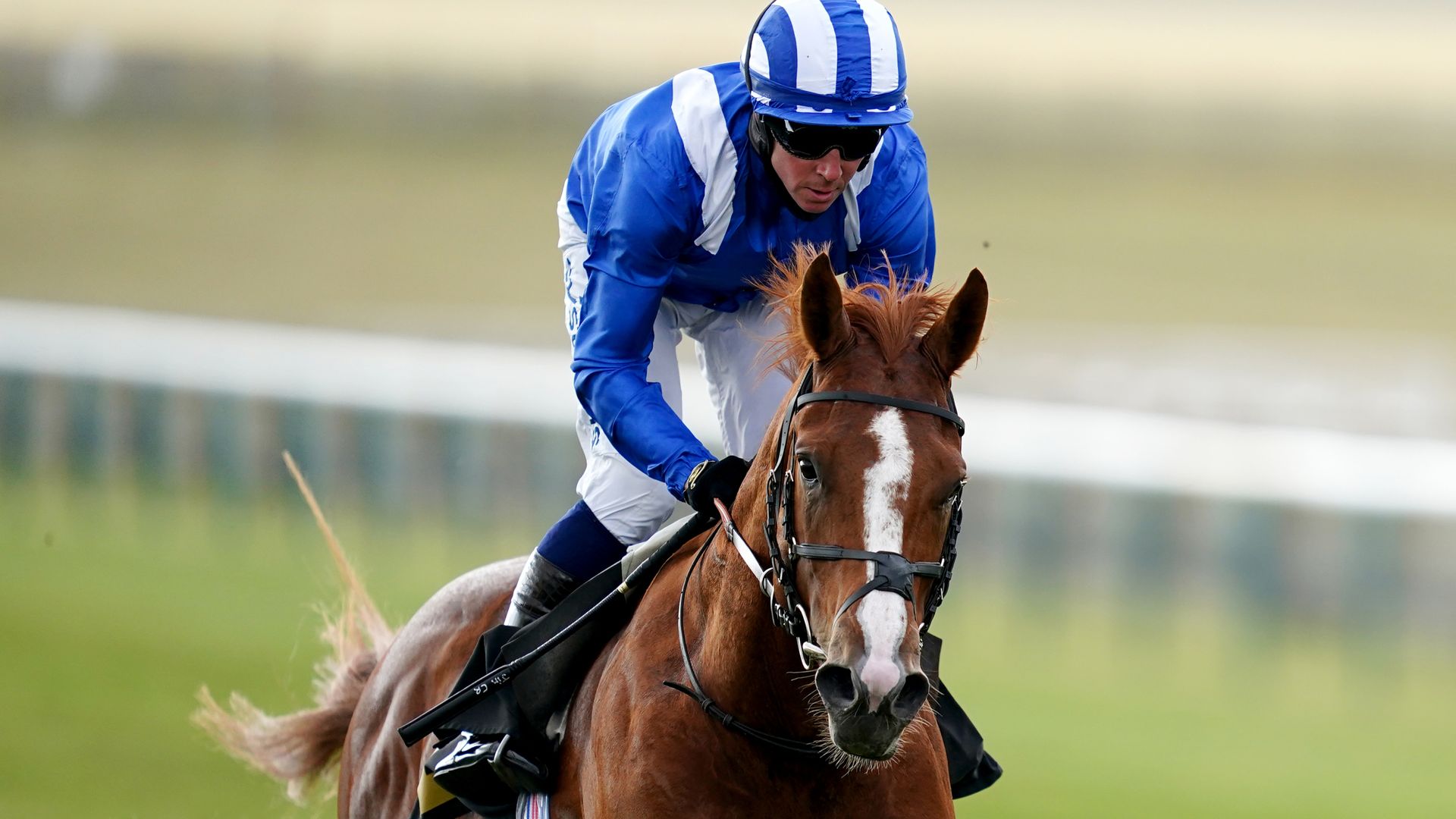 Late Derby absentee Mohaafeth gets the chance to strut his stuff in the Hampton Court Stakes at Royal Ascot on Thursday.

William Haggas agonised over whether to run his exciting colt in the Classic following heavy rain the day before.

He decided to keep his powder dry and aim for Ascot instead – yet with thunder storms forecast, the Newmarket handler fears his chance may be compromised again.

However, there appears no question of him not running following a promise to Sheikha Hissa, daughter of the late Sheikh Hamdan Al Maktoum, who founded the Shadwell Estate Company.

“He obviously doesn’t want much rain but he’ll run, I promised Sheikha Hissa he’d run at Ascot regardless,” said Haggas.

“Everything has been good with him, he’s in great form and he really is a lovely horse, we just won’t see him at his best on soft ground – but that’s the way it is.

Charlie Appleby’s One Ruler did run in the Derby won by his stablemate Adayar and finished sixth, just as he had in the 2000 Guineas. Appleby also runs Secret Protector.

Aidan O’Brien is represented by Roman Empire, who was fourth in the Dante when ridden by Hollie Doyle, and Matchless.

The weather apart, it promises to be a good day for Haggas, with Second Wind in the Norfolk Stakes and Aldaary in the Buckingham Palace carrying high hopes.

Unbeaten in two starts to date, with his latest run at Salisbury boosted by the runner-up since, Second Wind would like the rain to come, as he prepares to go up against the Wesley Ward-trained pair of Lucci and Nakatomi.

Haggas said: “I think he’ll enjoy some dig in the ground and that might not help Wesley’s horses, so I was quite keen to have a go. There was some cut in the ground when he won at Salisbury, I think he enjoys that.”

Aldaary was last seen finishing third at Goodwood, and Haggas has listened to jockey Jim Crowley in going for the Buckingham Palace.

The Newmarket handler said: “He’s an interesting one. He’s a nice horse. He was too far back last time out behind Rhoscolyn.

“It was very much Jim Crowley’s idea to come for this, I hadn’t given it a minute’s thought. I didn’t want to go for the Britannia because he’d have had nearly top-weight. Jim said had I considered the Buckingham Palace, I hadn’t, but I did and I thought it was perfect.”

Returning to the Norfolk, the aforementioned Ward seems to favour the John Velazquez-ridden Lucci over his stablemate, although the latter recorded a strong speed figure when beating stablemate Happy Soul on his one run to date.

The merit of that effort was seen subsequently when Happy Soul absolutely bolted up at Belmont Park. Qatar Racing bought into Nakatomi after his win, and as a result Oisin Murphy takes the ride.

Ward said: “At home, we have been working Lucci and Nakatomi together. Nakatomi was coming out on top, but then they had a workout in Newmarket on the Limekilns and Lucci turned the tables. He just bounced straight through to the front and would not give up the lead.”

There are plenty of others to watch, too, in what looks a strong renewal of the Norfolk, among them O’Brien’s once-raced Cadamosto and the Clive Cox-trained Instinctive Move, the mount of Derby-winning rider Adam Kirby.

George Scott is another trainer looking forward to chances on day three, chief among them George Peabody in the Britannia.

Progressive with two wins in novice company this year, the Holy Roman Emperor gelding is making his handicap bow – in what has been a long-range plan.

Scott said: “We’ve been aiming at this race a very long time. He was impressive at Doncaster and then followed up under a penalty at Thirsk. He’s a cool horse to train, very relaxed and straightforward.

“Obviously we need an enormous amount of luck, but I couldn’t be more pleased with him.”

Stablemate Too Friendly runs in the same colours of Bill and Tim Gredley, as he goes in the King Edward V Stakes.

The Camelot colt won well at Doncaster in March, leading to a crack at the Blue Riband Trial at Epsom, finishing sixth to Wirko.

Scott said: “I’ve been really pleased with his preparation. In hindsight I think Epsom came a little quick for him after winning at Doncaster, so we deliberately put him away and waited for Ascot.

“He’s wearing first-time cheekpieces and they seemed to have had an effect at home.”

Among the King George opposition is the O’Brien-trained Sir Lamorak, a winner at Dundalk in March and impressive after that in a Leopardstown handicap.

Ryan Moore rides and told Betfair: “He doesn’t want much rain, but I think he has a big run in him if the ground remains decent. He may be 15lb higher than when winning for me at Leopardstown back in April, but you had to be very impressed by what he did that day, and I think he is a good colt. And hopefully one better than his current mark of 100.”

An intriguing renewal of the Ribblesdale Stakes has attracted Sir Michael Stoute’s impeccably-bred Noon Star – a late defector from the Oaks but whose three-and-three-quarter-length second to Snowfall in the Musidora does not now have the slightly disappointing look to it that it possibly had at the time.

She gets has the opportunity to show what might have been at Epsom as she clashes with O’Brien’s Oaks third Divinely, while Mark Johnston’s Dubai Fountain also runs after being well-beaten in the Classic, for which she attracted a raft of support in the market beforehand.