Kody Scott was such a notorious neighborhood gangster that schoolchildren trembled at the thought of passing by his South Los Angeles home out of fear he’d pick a fight or steal their bikes and lunch money.

“That’s like butterflies,” said Skipp Townsend, a former gang member, now a community activist who works with 2nd Call, a community based organization that serves high-risk individuals. “It’s like man, my stomach gets jittery because we have no idea what Kody is going to do.”

But on this day, as Townsend and a schoolmate passed by 69th Street near Florence and Normandie avenues, they happened to catch Scott on a good day.

Townsend’s schoolmate told Scott he had a stomachache and was just trying to get home. Scott patted him on the back. “All right, I’ll see you tomorrow,” he said, then sent them on their way, unscathed.

The curious life of “Monster” Kody Scott was soon to emerge as a cautionary tale of redemption and the relentless tug of gang life.

A well-known gang banger in the 1970s, Scott remarkably became a motivational speaker and bestselling author of a 1993 memoir that took a sobering look at gang life in L.A. The book, which followed his journey from violence toward transcendence, arrived at a time when much of America outside L.A. and New York City was still unaware of gang culture.

Although Scott escaped death numerous times as a member of the Eight Tray Gangster Crips, then became an author who counseled others to avoid gang life, the 57-year-old was found dead on June 7 at a homeless encampment near the San Luis River Trail in Oceanside, according to the San Diego County Medical Examiner’s office.

Scott’s girlfriend discovered his “badly decomposed” body in a tent, said Tom Bussey, a public information officer for the Oceanside Police Department. It appears Scott died of natural causes and not foul play, though the cause of death has yet to be determined, Bussey said. 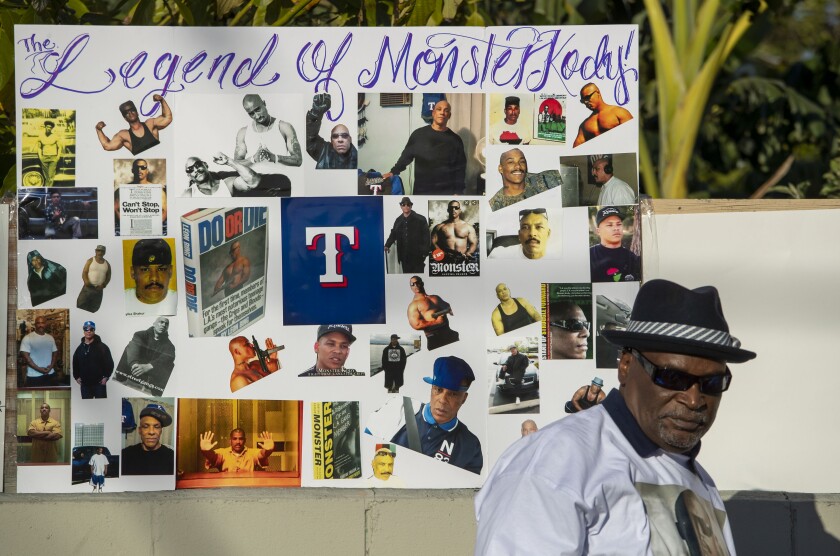 Mad Bone stands near a poster remembrance at a vigil for Kody Scott, a former L.A. Crips gang member, in South Los Angeles.

Scott, who changed his name to Sanyika Shakur marking his rebirth and the end of his gang career, had a complex life. For every step forward, he seemed to take at least one step back.

Despite his promising career in Hollywood — his memoir was discussed as a possible film by “Training Day” director Antoine Fuqua, which never materialized — Scott wound up being placed on L.A.’s most wanted list for allegedly stealing a car, a potential third strike that would carry a long prison term, and living at an Oceanside homeless encampment. But within the last year, he was working on another book and in talks with a streaming service about adapting his story and launching a podcast, said Leo “Pretty Boy” Smith, a former gang rival who planned to cohost the podcast.

Born Kody De’John Scott in November 1963 to Birdie Scott, he discovered later that his father was L.A. Rams running back Dick Bass, who died in 2006. (He told “60 Minutes” in an interview with Steve Croft in 1993 that his godfather was singer Ray Charles, a family friend).

Scott was initiated into the Eight Tray Gangster Crips the day of his sixth-grade graduation at age 11. By age 13, he had been given the nickname “Monster” after beating a man so badly that police told bystanders the person responsible for the attack was a “monster.” The name stuck and for several years, Scott worked to live up to his moniker.

After years of moving up the gang ranks and then being shipped to prison for crimes like possession of an assault rifle, Scott decided to trade in his gang career, convert to Islam and strive to dissuade other youth from joining gangs. While in prison, he wrote the frighteningly authentic memoir Monster: The Autobiography of an L.A. Gang Member, which was published in 1993.

Léon Bing, a fashion model turned journalist, was the first writer to bring Scott to the attention of the world beyond L.A. in her 1991 book about gang life, Do or Die. Scott is photographed shirtless on the book’s cover with dark shades and a MAC-10.

Bing remembers him being an avid reader whom she considered intelligent and someone who could easily hold his own when they playfully traded insults. One day while Scott and Bing were riding in the backseat of a car through the hood, she recalls asking him to show her his “mad dog” face.

“He took his cap and [turned] it around to the side like the way a kid who’s trying to look tough will … and he crossed his eyes and stuck the tip of his tongue outside of his mouth and he said, “Scary huh?” Bing recalled.

“People really respected him in the hood and the people who were afraid of him, I think were afraid for all of the wrong reasons,” she added. “He was not looking to show off strength. He just was who he was and he wasn’t a showoff.”

At Scott’s request while he was incarcerated, Bing helped him coordinate a toy drive at a local children’s hospital with then 15-year-old Bernard Cooper, a young member of the Eight Tray Gangster Crips.

“I was excited to get a letter from Monster Kody,” said Cooper, now 49 and running a recovery program for former gang members and felons. “Of all the little young kids out here, he chose me.”

Cooper, who joined the gang at age 13, said Scott took him and other recruits to the gun range, where he shared street game with them.

“People just assume that he closed off because of the stories that they hear about him or whatever, but I’ve never had nothing but love from him,” he said. “Even when he ran off with my mother’s .25 automatic and my mother was chasing me around about it. … he said he needed it, so I let him get it even though he never gave it back.”

Despite his reputation, people closest to him said that they rarely — or never — saw the “Monster” side of him.

“Of course I heard about the violence and I also read it in the book, but I never met ‘Monster Kody,’ said Sanyika Shakur II, 31, Scott’s youngest son. “I always [saw] pops.”

He added, “[He was] like the older best friend. This was the guy that comes in, he’s ready to play all day. My mom was probably at home taking care of all the business [and] getting on our behind, he comes in, he wants to play, crack jokes, tickle, play fight, things like that.” 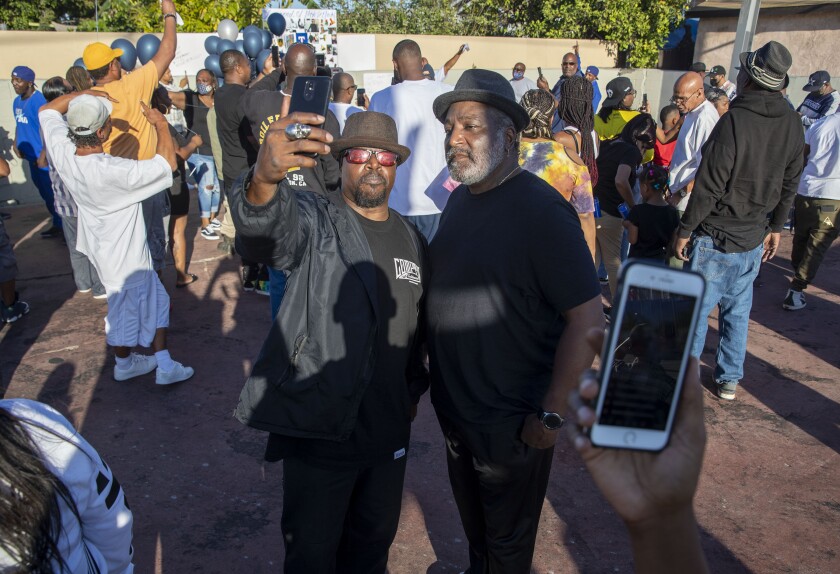 Leo “Pretty Boy” Smith, right, and an unidentified man, left, take a selfie during a vigil for “Monster” Kody Scott in L.A.

Before Scott died, he also made amends with Smith. The two had grown up in the same neighborhood and knew each other’s families, but when Smith joined a rival gang, Rollin Sixties, they became enemies. In 1981, Smith was arrested for allegedly shooting Scott. Smith was found not guilty and a decade later, while both he and Scott were in prison, Smith wrote him a letter to congratulate him on his book. From there, they began sending letters back and forth.

Early last year, the two talked about starting a podcast together that would detail their upbringing, their fall-out and eventual reconnection, but Smith struggled to get in contact with Scott, who was “always on the go.”

Scott’s son was pragmatic about the arc of his father’s life.

“It’s the underdog story. It may not have had its glorious ending, you know, but s—, life isn’t always a fairy tale,” he said. “As real as it can be, this guy was a compassionate guy. This guy was a loyal guy [and] a hell of a rider, just charismatic and a person you love to be around.”