For a short moment, deep in the second set of what was to be the most crushing defeat of her year, it seemed Naomi Osaka may just have been able to tap into the resolve that has served her so well in her career.

Down a set and serving to stay in the Olympics, she saved consecutive match points, one with a blazing forehand winner, and crept up to a point of holding her serve.

But as was the case throughout a tough, lethargic day on the court, the resolve was not present. The mental tank was dry. She ended the match soon after with two of her many backhand errors as her dreams of winning an Olympic gold medal on home soil in Japan came to a crashing end. She was defeated 6-1, 6-4 by the Czech Republic’s Marketa Vondrousova.

Under regular circumstances, as regular as being seen as the face of the Olympics can be, this could have ended differently. But in addition to all the pressure that has been building since the beginning of the year and even longer, the type of pressure Osaka has thrived on in the past, it also came after her decision to withdraw from the French Open and Wimbledon in order to prioritise her mental health.

Even as she retreated back to the US after her decision to skip press conferences in Paris led to a mass of attention and criticism, the noise was deafening. The pressure cooker of the Olympics was no help. Her defeat seemed like the consequences of all of those stressors combined.

Osaka left the court by a side exit instead of walking through the mixed zone as players are required to do, even if they choose not to stop to speak with the media. The initial word was that she was not returning. According to Tokyo Sports, the Japanese Tennis Federation stepped in and convinced Osaka to return.

“I mean yes and no,” Osaka said after being asked if she felt the pressure was too difficult to handle. “I should be used to it by now. But at the same time, the scale of everything has been a bit hard because of the break that I took. I am glad I didn’t lose in the first round at least.”

From the beginning, Osaka was off. She opened the match by spraying wild forehand errors as she struggled to put the ball into the court. She fell down 4-0 in a flash. As the unforced errors continued to pile up, Vondrousova took the first set 6-1.

An immediate response was needed and for a while it seemed to be brewing. Osaka opened the second set with some efficient serving and authoritative ball striking, establishing a quick break for a 2-0 lead.

Throughout the encounter the 22-year-old Vondrousova soaked up pressure from Osaka’s first strike and she slowly pulled her in. Osaka served a double fault to give up the break.

The players held serve until 5-4 in the second set when, under the glare of the scoreboard as she served to stay in the match, Osaka blinked. 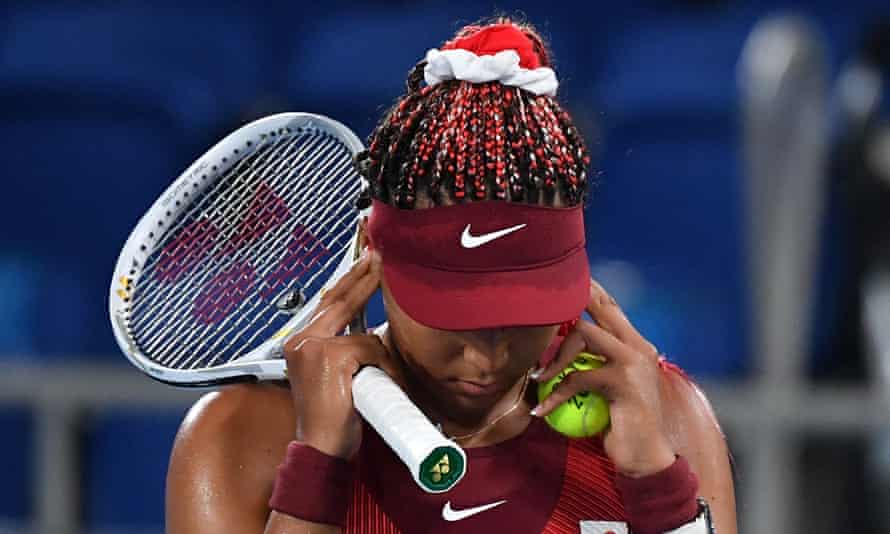 The pressure resting on Osaka did not go unnoticed by her opponent, who used that knowledge to play freely. “It’s tough to play in Japan also, Olympics,” said Vondrousova.

As attention rests on the fallen star, the victor is so often forgotten. But such a convincing result was not possible without an excellent performance from Vondrousova, an extremely capable and talented player who reached the French Open final in 2019 and was ranked in the top 20 until this year. Vondrousova neutralised Osaka’s serve and made her uncomfortable with a slew of delicate drop shots.

Sign up for our Tokyo 2020 briefing with all the news, views and previews for the Olympic and Paralympic Games.

During the Japanese section of Osaka’s press conference, she was asked she how was. Tears welled in her eyes and the 23-year-old could not respond. Her year had been leading up to this and now it is done.

The next step for Osaka remains unknown. She says she does not know when she will compete once the sting of this defeat begins to wear off: “I am a person who wings a lot of things. That is either a really good thing or a really bad thing.”

What separates tennis from the majority of other sports in Tokyo this year is that it provides opportunities for redemption. That moment will surely come, but Osaka will never have another chance to win her home Olympics.