Of all the position groups in a modern NFL Franchise, Linebacker has probably changed the most. From traditional 3-4 and 4-3 formations where a team would have 4 true starting linebackers split into outside/inside skill sets, to hybrid models where a Defence rarely fields more than 2.

The Edge Rushing position now morphs into the Linebacker room as speed rushers flex between 2 point stances from the 5 to 9 alignment. No longer are GMs searching for big physical block shedders, they’re looking for guys that don’t get blocked – in the first instance – because of their speed and decision making.

As attacking playmakers have become more diverse and eclectic, Defensive Coordinators have had to react swiftly by increasing their use of Nickel and Big Nickel packages. Dropping a Linebacker for an extra Safety (Big) or Slot Corner to try and mitigate the speed and space exploitation of their opponents.

Teams were drooling over Kyle Pitts (Offence) in this year’s Draft as they did Isaiah Simmons (Defence) in last year’s. These athlete “types” abley represent the new batch of players that teams covet in the NFL’s contemporary arms race. “Off-Ball” Linebackers are the zeitgeist and it isn’t going to change any time soon as rule changes favour Offensive players and more open – spread – tactical alignments.

As we’ve highlighted with the rest of the AFC East position rooms, teams are loaded at Tight End and Receiver specifically to exploit these trends. Slowly the counter measures are being deployed with deeper Corner rooms and extra starting calibre Safeties, but many rosters are lacking the speedy 3 Down Linebacker duo that defines the very best modern Defense (think David and White of Tampa). Let’s look at who the East will be fielding in this exciting new landscape of second level Defence: depth, Cap hits, Rookie Potential scale. 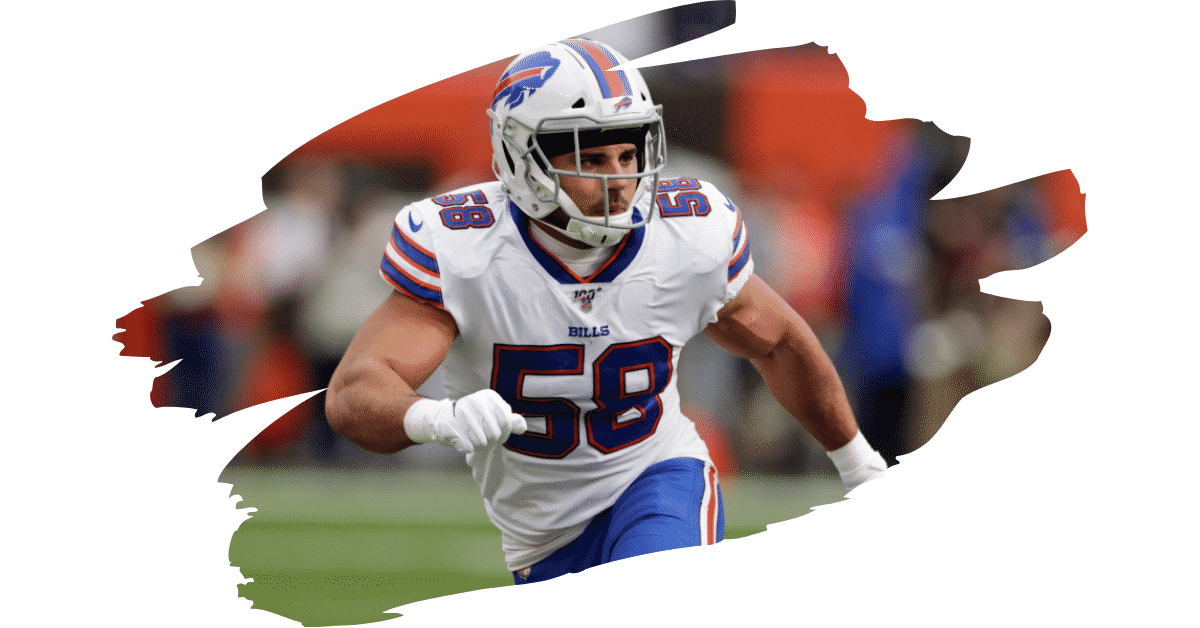 Right off the bat I’ll state Buffalo’s starting duo of Edmunds and Milano is top drawer and the best in the East. I was super jealous when the bewildering athlete Edmunds was picked 16th overall in the 2028 Draft. At 6ft 5 inches and 250 lbs he’s tailor made to match the best of the new crop of pass catching RBs and TEs. His athletic testing is Godly, grading as 9.74 RAS (Relative Athletic Testing) and his football intelligence matches.

Buddying up is Milano, another smart player. After a Stella 2019 in which he logged over 100 tackles, 1.5 Sacks, 7 TFLs and 7 QB hits his 2020 campaign was muted with some injuries. His impact shouldn’t be underestimated as in his absence many opposing play-makers had much easier days than they would have otherwise.

This duo should be taking 90% of the snaps each in 2021 and will be key components of Buffalo’s Super Bowl run. With New England’s upgrades at Tight End, Gesicki in Miami and surely having to take on Kelce somewhere in the playoffs their performances are vital.

AJ Klein is de facto LB 3 taking many snaps (75%) in Milano’s absence last year. He produced a typically robust Klein year with 75 tackles, 5 Sacks, 5 TFL and 9 QB hits. He’s a worthy foil for Edmunds and Milano and will surely be a difference maker in an extended 17 game campaign.

Tyrel Dodson is the most intriguing of the remaining players in the room. An undrafted free agent out of Texas A&M in 2019 he’s been quietly developing under McDermotts tutelage. Starting 36 games for Texas A&M and racking up 106 tackles, 4 INT, 6 Sacks at 6ft 2 inches and 242 Lbs he’s got all the traits necessary to compete. 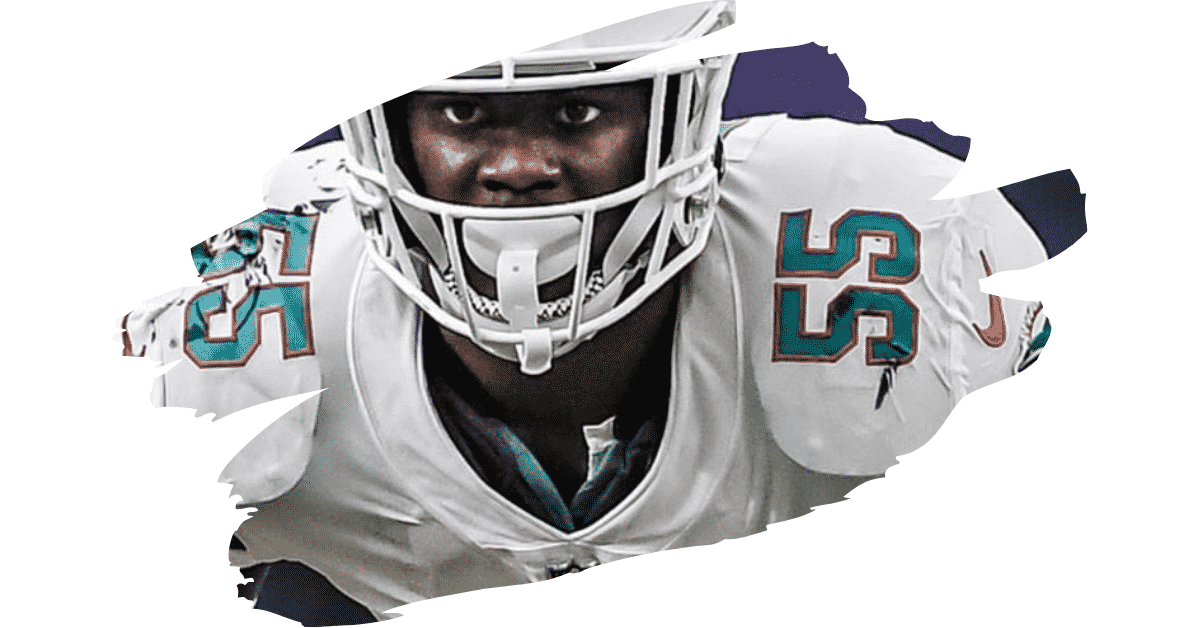 If you’re wondering why Rookie Jaelan Phillips isn’t on this list it’s because we reviewed him as part of the Edge Rusher room breakdowns. Miami has listed him as a Linebacker but he was Drafted for a primary reason and that’s to be wreaking havoc in the backfield.

Many pundits have focused on the Dolphins Linebackers as a reason to undermine Grier’s team building abilities. Of all the expensive Free Agents brought in during the 2020 off-season spending spree, Kyle Van Noy was the most notable. Cutting him this off-season after only 1 year of a hefty 4 year deal is widely seen as some form of GM malpractice.

In reality it’s called cutting your losses. All good traders do the same thing. Van Noy promises much while delivering a thinly spread venner of averageness. Grier saw an opportunity to upgrade with a Lawson for McKinney trade (via Houston) and convert Van Noys bounty into a Baker extension.

McKinney is in Miami to put his shoulder down and hit running backs in the gap. He offers more sideline to sideline speed in the passing game and is an “action speaks louder than words” type rather than the Van Noy churping psuedo lineman. After a Pro Bowl year in 2019 McKinney is coming off a shoulder surgery curtailed 2020. He will be a 3 Down, 90% Snap taking lynch pin if healthy this year.

Having effectively swapped Lawson for Phillips at Edge and McKinney for Van Noy at LB while saving a boat load of cash, Grier invested in his own. Miami fans are watching closely as to Grier’s intentions moving forwards with paying his best players or letting them walk for comp picks following the New England model.

He’s made a solid statement this year by taking some freed up cash and giving Jerome Baker a tidy extension. Drafted in the 3rd round in 2018 by Grier, Baker has blossomed into one of the new regimes Poster Boys. The fans love him, his team mates love him and he represents what Flores wants moving forwards.

Don’t expect Baker to rest on his laurels after signing a 3 year $39 million contract including a tasteful $12.5 million signing bonus. The Ohio State product will play a large part in whether or not the Grier/Flores regime goes down in Miami folklore or applies for new jobs over the next 3 years.

Andrew Van Ginkel is the most noteworthy in the rest of the Linebacker grouping. His Rookie season was hindered with injuries and a steep learning curve coming from Wisconsin. Then in 2020 he blazed his own trail showing great speed and athleticism. Earning 46% of the Snaps in 11 games he made impact plays with 5.5 Sacks and 3 forced fumbles (FFs). Another nail in Van Noys coffin. 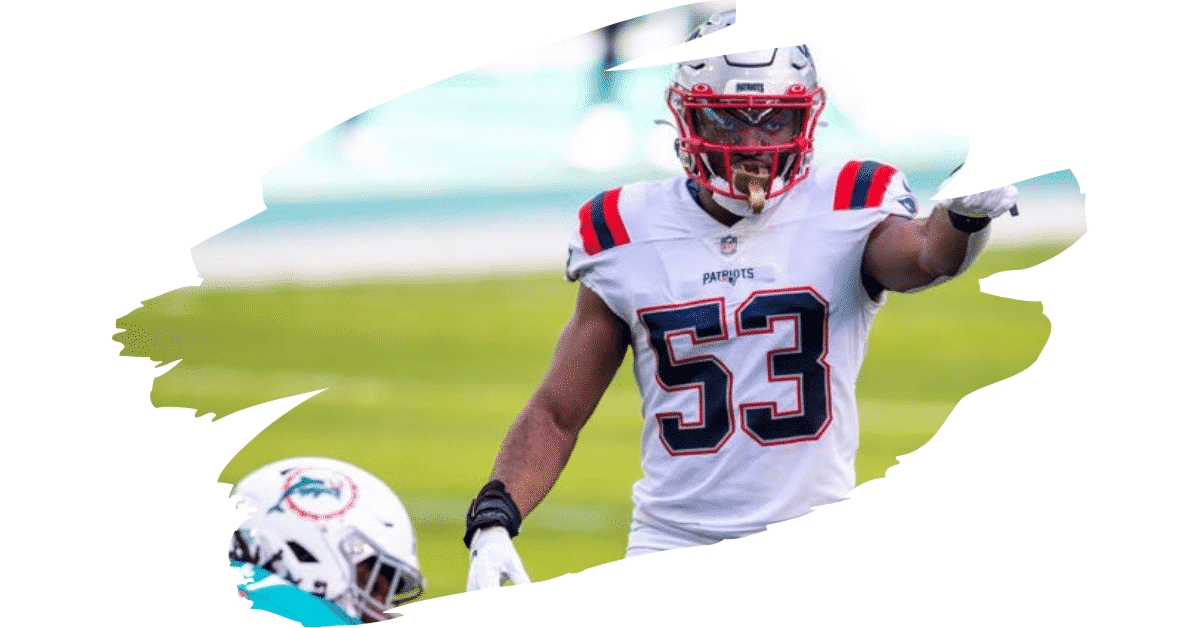 As with Phillips in Miami, new signing Matt Judon and Rookie Ronnie Perkins were reviewed in our Edge Rusher article. New England’s Linebacker room predominately revolves around what a 2021 Hightower looks like. As the second highest paid player on the team and a key leader if he returns as hungry and prepared as prior to his 2020 opt out then New England’s Defence will be fearsome this year.

Hightower has logged 8 years, 3 Super Bowl rings, over 500 tackles, 25.5 Sacks, 42 TFL and 63 QB hits. He’s the centre of gravity for the Patriots D and the rest of the division will be hoping he’s regressed physically with 18 months away from football. His impact will be quickly realised one way or another.

Van Noy has headed back to New England after a year with Miami. Leaving Belichick’s Bossom revealed the ceiling on his ability and it should put a spring back in his step being back under his master’s wing again. With all the solid additions to this unit Van Noy can have a productive season scrapping the line and making late blitzes on a 60% Snap count.

Another migrating Miami player joins the room in Raekwon McMillan. He was a steady, workmanlike player in Miami until Grier started upgrading the DLine. Better talent and a significant injury pushed McMillan to the bottom of the pile in South Florida and when Grier was provided an opportunity to move him to Las Vegas for gadget receiver Lynn Bowden his time ran out.

McMillan was unable to break into an awful Raider Defence so his career is in desperate need of a shot in the arm. If anywhere will make him or break him it’s New England. He lacks power and ingenuity but he could carve a solid role niche if he can find his mojo again.

Josh Uche is an interesting second year player. He was broken in slowly with only 18% of the Defensive Snaps yet logged 1 Sack, 7 QB hits and 2 TFLs. He came out of Michigan with a really strong Senior year tallying 7.5 Sacks. His physical and character makeup suggest success in the North East.

Cameron McGrone adds a dash of youth as New England’s 5th round pick – also from Michigan – in the 2021 Draft. His stats and metrics don’t elude to anything thrilling but you can trust Belichick and Harbaugh (and their Coaching/Scouting teams)to have mutual interest in getting the right players moved. 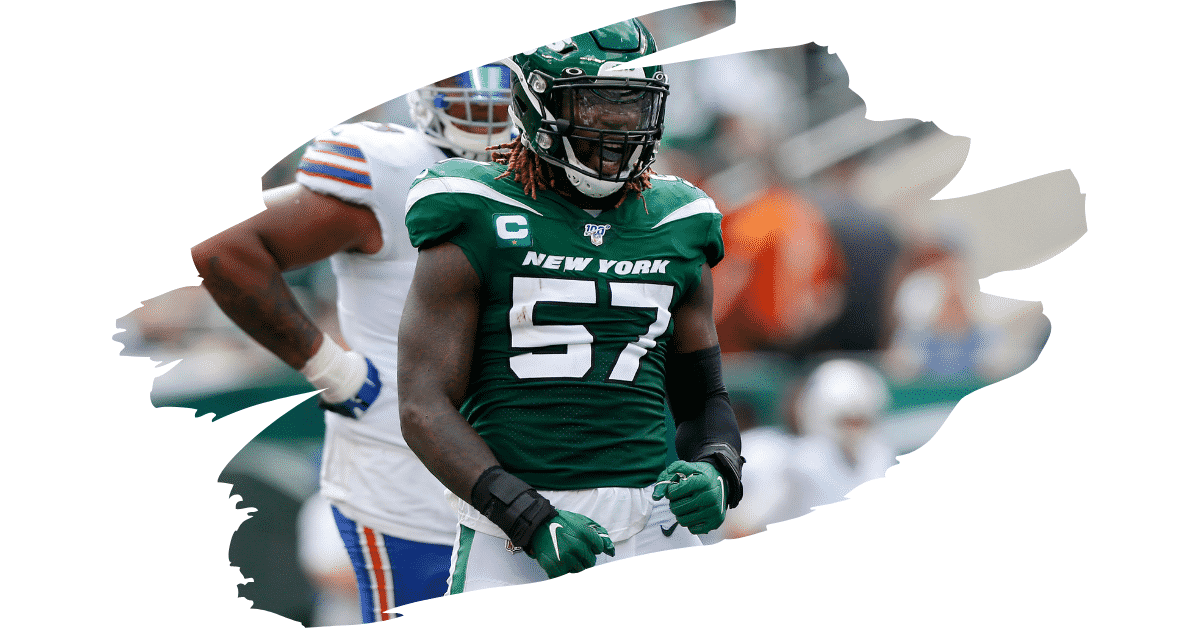 The Linebacker room is an interesting reflection of Neo-Jets’ thinking as Douglas starts to unleash his master plan. In 2021 the performance burden falls squarely on the (large) shoulders of CJ Mosely. Returning after opting out of 2020 and losing most of 2019 to injury, Mosely is an old Skool MIKE.

His 5 years with Baltimore were impressive. But, as is the way with dying positions the Ravens didn’t want to blow their Cap on a limited range “thumper”. The Jets paid Mosely $85 million on a 5 year deal with $51 million guaranteed. There is simply no way his role – even with Pro Bowl calibre play – can be justified at that price. He will restructure in 2022 or be cut (no one will trade for him on that contract).

I wish him no ill, he’s a good good player (at least was), but beyond having made serious “bank” it’s hard to see where his career goes from here. Defensive Coordinators will be looking to exploit New York’s second level with weakness at Corner and Off-Ball Linebacker which could make for long afternoons of Mosely chasing Running Backs laterally.

Jarrad Davis is another MIKE bought over from a career fast fizzling out at Detroit. It’s hard to see what extra he brings to the room. I assume he’s the best available backup for Mosely if he fails to stay healthy. It’s safe to assume that Saleh’s vision is a Big Nickel Defense.

I’ve lorded the Nasirildeen pick in previous Safety and Cornerback articles as he remains (for me) one of the steals of the Draft. Jeff Ulbrich (DC) will be deploying him all over the field based on the weekly opposition. It will be a baptism of fire taking on the league’s best Tight Ends and speedy halfbacks. I back him to rise to the challenge.

Camilo Eifler and Jamien Sherwood are also both Rookies joining the new look Jets. Eifler is a speedy Off-Ball athlete who played 19 Games for Illinois including 63 tackles and 3 Sacks – he’s also named after a chocolate milk drink. Sherwood is also a spritely athlete who started 3 years and 34 games for Auburn. He notched an impressive 77 tackles, 8.5 TFLs and 2.5 Sacks.

Buffalo are set at the 2nd level with one of the best athletes in the league (Edmunds) and ingrained cohesion and synergy between them and the rest of their front 7. New England will live or die by Hightowers influence and play level after a lengthy sabbatical and an aging body. Belichick has deftly overhauled his Defensive unit while most of the media focus on the QB competition and Tight End battle.

Miami have tipped their hat at contentment with their key Linebacker duo and tactical role players. Most of the success of this unit will come from McKinney’s play coming off surgery. Baker will do what Baker does. Van Ginkel will blitz, can McKinney solidify the run Defence.

Over in New Jersey the performance of Zach Wilson will take the spotlight off the many Defensive holes. Mosely will play out his Jets career as professionally as he always does and Ulbrich/Saleh will hope the Rookies can hold their own in what will be a tough season on that side of the ball. Free Agent reinforcements are assuredly coming in 2022. 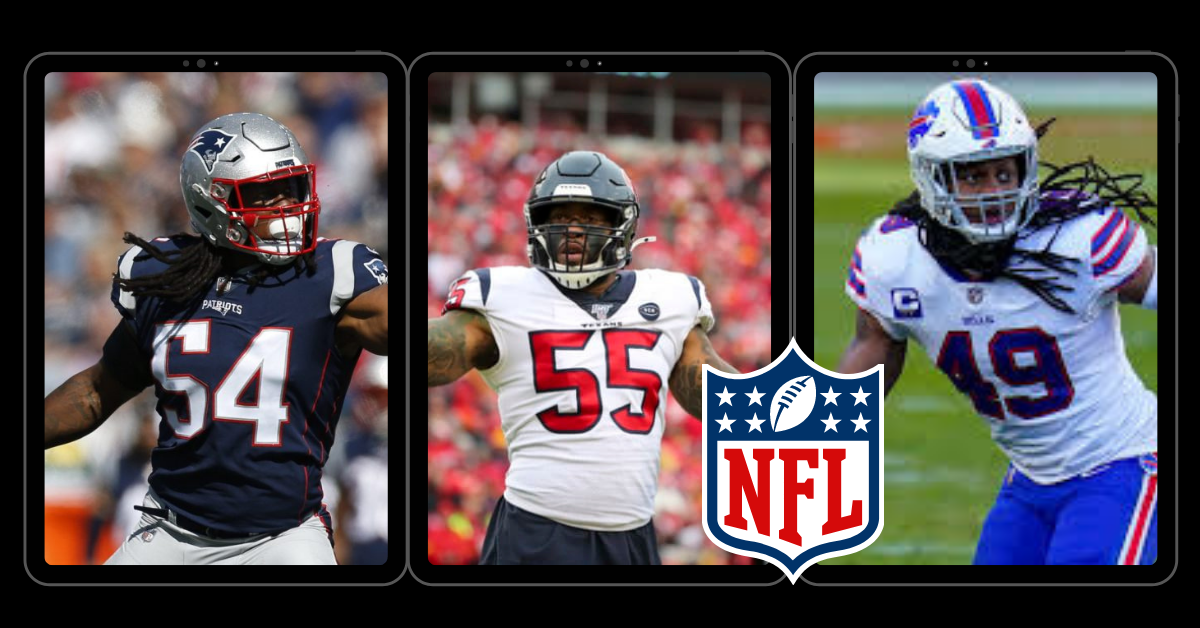