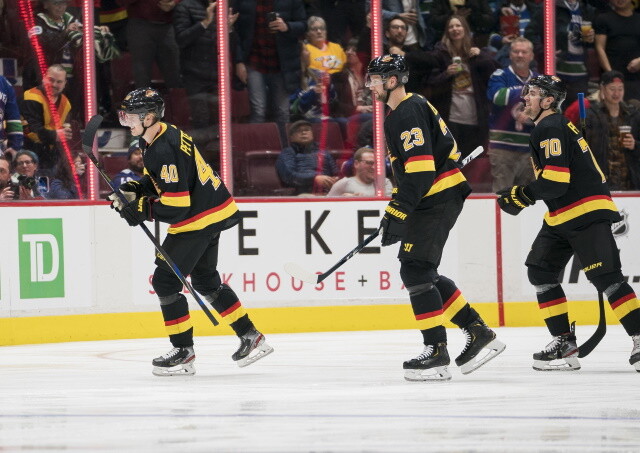 On the Canucks Edler, Pettersson, Hughes and Eriksson

Mark Stow, Edler’s agent: “Alex loves Vancouver, certainly the desire is to return. I am looking forward to the call.”

Rick Dhaliwal: Ray Ferraro on Donnie & Dhali on the Canucks: “They have a good base to work with but until they re-capture cap space, it is tough to be as good as you can be. You do not need a 3M 4th line centre. Also, do not not go crazy in free agency, put the phone away.”

Rick Dhaliwal: Barry continue: “Canucks have cap issues, I dont think we can do long term deals for Petey and Quinn. We have starte dthe dance, we are engaged in talks.”

Rich Dhaliwal: Barry on Eriksson: “We will have discussions with them around the time of buyouts. We will see if that is the way to go.”

Sheng Peng of San Jose Hockey Now: Frank Seravalli has San Jose Sharks forward Evander Kane at No. 5 on his trade board. Kane lead the Sharks last season with 22 goals, but has a history of wearing out his welcome within the locker room.

“He’s been known to bring turmoil into a team and not bring a team together,” said another NHL source familiar with Kane, “and that seems to have continued.”

The trade return for Kane is not expected to be a lot.

Kane has four years left on his contract at a $7 million salary cap hit.

On Ducks Henirique and Getzlaf

Eric Stephens of The Athletic: (mailbag) If Anaheim Ducks captain Ryan Getzlaf decides that he not coming back next season, the odds of Adam Henrique returning improve.

Getzlaf has said that he’ll take some time to decide on future and hasn’t hinted at leaning one way or the other. He has said that he prefers to only play of the Ducks. If he does return next season, he knows it will be at a greatly reduced salary. Waiting till have the expansion draft to finalize a deal makes sense.