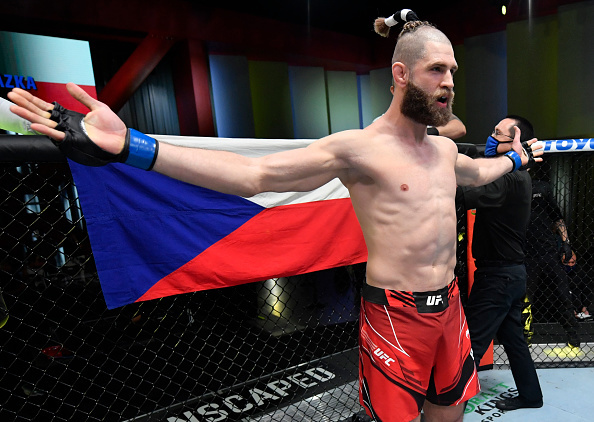 LAS VEGAS, NEVADA – MAY 01: Jiri Prochazka of the Czech Republic prepares to fight Dominick Reyes in a light heavyweight bout during the UFC Fight Night event at UFC APEX on May 01, 2021 in Las Vegas, Nevada. (Photo by Jeff Bottari/Zuffa LLC)

UFC light heavyweight Jiri Prochazka has provided an exciting update for fans hoping to see a highly anticipated bout between himself and No. 3-ranked Aleksandar Rakic in the future.

Prochazka is a fighter who has been on everyone’s radar since bursting onto the light heavyweight scene following a succession of back-to-back KO wins against former title challengers Volkan Oezdemir and Dominick Reyes in his first two UFC outings. Jiri’s explosive and unorthodox style of fighting has already won over fans and such that he has already been labelled as ‘the next champ’ of the light-heavyweight division.

Meanwhile, the next big fight in the light heavyweight division is set to take place at UFC 267 on Fight Island where Poland’s Jan Blachowicz will make his second title defence against Brazil’s Glover Teixeira.

Since his KO win over Dominick Reyes in May, Prochazka has remained quiet and ignored several callouts to fight in the division but did reveal during an interview with James Lynch of Fanatics View shortly after his bout that talks were surrounding his role to serve as a backup fighter should Blachowicz or Teixeira be unable to compete in the main event in Abu Dhabi. Prochazka has re-affirmed this and told MMASucka that he is the official replacement for the light-heavyweight title fight.

In the light-heavyweight division, both Prochazka and Rakic have fought and beaten the best to earn their rightful place in one of the organization’s toughest divisions. Therefore, a future bout between the two was destined to happen, and whilst Rakic has expressed his frustration and campaigned endlessly to set a title contention bout between the two, it has only been recently that Prochazka responded and declared his stance on a potential fight down the line.

He told Steven Irvine for MMASucka, “I am looking forward to that because I want to be the best of my division, so I will need to defend my title against all of these guys, so I believe that we will meet each other, but now is my time for the title”.

It has been almost five months since Rakic’s last outing, and three for Prochazka, and based on their position in the rankings, this would typically be the fight to make to determine who is the number one contender to fight the winner of Blachowicz/Teixeira following UFC 267. However, the company appears set on Prochazka being the backup fighter, which leaves Rakic, despite his repeated efforts to get fight with Jiri, no other option but to find another opponent in the meantime, whilst Prochazka awaits a potential call-up to fight for the light-heavyweight strap on Fight Island.

Although Jiri Prochazka is still early on in his UFC career with only two fights under his belt, the decision to select him as the backup fighter is, without a doubt, a result of the impact he has made in his first two outings, as well as the explosive fighting style that has become somewhat favourable in terms of what ‘sells’ fights.

“It is now my time for the title, if there is a chance to take a title, I don’t want to listen to any other fighters, my vision is to be champion,” Prochazka said.

Whether he becomes the replacement fighter or has a future showdown with the winner, fans will be guaranteed to tune in and see what is next.

With an explosive start to his UFC career, an exciting and fan-friendly style combined with spectacular finishes against two former title contenders, Jiri Prochazka is already being touted by the MMA community as the next face of the light-heavyweight division, and with all that momentum, don’t be surprised if we see a Jiri fight before the year draws to a close.