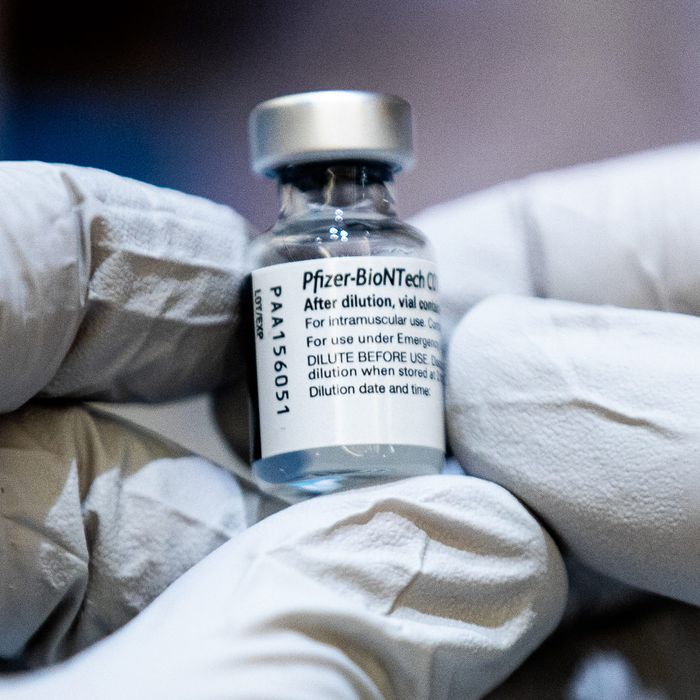 This may be in you, and you don’t even know its name.
Photo: Roger Kisby/Bloomberg via Getty Images

On Monday, one of the most popular and talked-about drugs in the world was approved by the FDA to prevent the coronavirus. It’s called Comirnaty.

You know it, and know it well, as the Pfizer vaccine or, perhaps more properly, as the Pfizer-BioNTech mRNA COVID vaccine. But now that it’s officially approved, the vaccine has finally been allowed to use its fancy brand name: Comirnaty.

“I try not to be too harsh with new names because the problem with new names is that they’re new,” said Michael Bierut, partner at Pentagram Design. The first step, clearly, when evaluating a novel name is to grapple with trying to say it from memory. And he tried.

“It’s something like co — it begins with co. Co-mert-i-nat?”

He did not get there.

After a couple of tries, it gets easier. It’s just like you’re saying community. With a mouthful of peanut butter. While you’re in Dublin.

Bierut and others who work on the names of things all agreed that naming is hard and that the pharmaceutical naming space is particularly tough for a range of reasons from the regulatory to the linguistic.

“I really appreciate the challenge that they had! It’s really easy to take shots and say ‘How funny,’” said Bierut, who most recently worked on the team that named OMNY, the thing you now tap your phone on to pay for the New York City subway.

Certainly, there was a general sense of dismay or at least empathetic pain from the people in the greater naming community regarding Comirnaty.

“We always give clients an honest assessment,” said Mike Carr of NameStormers, who has been naming things since the early ’80s — Angry Orchard and CarMax are some of his enduring successes. “This is about as bad a name as I’ve seen.”

“Let me first start by saying that any naming process is extremely difficult, so I would never want to put a naming team down,” Molly Davis, the chief storyteller and strategist of Wonsupona, which does strategic brand naming and storytelling. “From what I’ve gathered, this name had a tall assignment: to include COVID-19, mRNA, community, and immunity.”

That ambition may be where it went wrong.

“Often when there are many naming objectives, the real story behind the name gets lost and the effort is just to appease executives,” she explained. “At first glance, Comniraty feels as confusing as these few years have felt,” she wrote with kindness, accidentally misspelling Comirnaty.

“The creators of this name packed all these spot-on allusions into four syllables,” wrote Margaret Wolfson, founder and creative director of River + Wolf, in an email. “That is not an easy thing to do, especially given the hyperstrict regulations and issues around pharmaceutical naming and trademarking,” she added. “The name might be a little difficult for some speakers to say, as ‘mirnaty’ doesn’t quite roll off the tongue and just misses the mark as an elegant sound. That said, people will get used to that, and the melding of relevant concepts makes it a winning mark.”

While naming is a lot about sound, you can’t ignore how it looks. It’s got all those rounded top letters making it messy to read: Cmmmmnnmmrrnnty.

The Pfizer vaccine’s new name was created by the Brand Institute, a specialist in the pharmaceutical naming space. And the name isn’t new in Europe, since Pfizer first rolled out Comirnaty when it received EU regulatory approval last Christmas.

Meanwhile, did you know the Moderna vaccine is named Spikevax? As a name, that seems kinda … metal.

According to Fierce Pharma, the other names BioNTech and their friends at Pfizer considered were Covuity, RnaxCovi, and Kovimerna — all of which are not great. BioNTech, like most companies, captures names all the time: Right now, according to the U.S. Patent and Trademark Office, it is sitting on some incredible names, including RIBOSPHERE and BLADDERTYPER.

The Big Pharma parents of COVID vaccines aren’t just tasked with the challenge of branding. They have to rebrand what are already extremely well known products around the world.

“We’ve spent like months now learning not only these names but kind of getting a feel for them,” said Bierut. “Pfizer is kind of the Coca-Cola, Moderna feels a little like Pepsi, J&J ended up being like RC Cola, an off-brand, funny thing. They acquired brand profiles on their own, no doubt to the chagrin of the sponsoring companies.”

Now they have a mountain to climb. The public’s perceptions and feelings about the vaccines “will now have to be displaced by these new names we have to learn,” Bierut warned. “That creates a new, tough slope these brands have to climb as they try to intrude upon our consciousness.”

“The golden rule for a brand name is it has to be memorable,” Carr said. “We do name testing all the time, and the only way you can test that is you let a day or two go by and you call them up and say, ‘Remember that new Pfizer vaccine?’ And they say, ‘Oh, great, I’m excited about that,’ and you say, ‘Okay, what was it called?’”

“I bet you have close to zero people.”