Rory McIlroy is bullish on his chances of ending his seven‑year major hoodoo when the 121st US Open shoves off on Thursday morning. The world No 11 said he has charted progress since formally teaming up with the English swing coach Pete Cowen in an effort to revive his fortunes and enters the season’s third major with renewed confidence after a productive week of practice in Florida.

“I’m feeling good about where my game is,” McIlroy said. “It’s about going out there and playing as free as I can and having that mentality that I had as a 22‑year‑old and just trying to get into that mindset.

“The technical and mechanical parts of it are all there. It’s just a matter of going out in a US Open setting and just trusting what I’ve been doing in practice.”

The 32-year-old Northern Irishman, who secured the first of his four major titles at the 2011 US Open at Congressional in Bethesda, Maryland, remains among the headliners as the world’s best have descended on this city‑owned oceanside course. The winner will claim roughly $2.25m (£1.59m) from a $12.5m purse, the highest among professional golf’s four bedrock events.

“There’s not really any secrets out there. We all know what to do and how to play it, and it’s just a matter of who can execute over the four days.”

McIlroy will try to follow in the footsteps of Phil Mickelson, who snapped his own slightly longer drought in becoming the oldest major winner in history at the US PGA Championship last month. The six-time US Open runner-up, who turned 51 on Wednesday and required a special exemption for entry before the win at Kiawah Island last month, will attempt to become only the sixth player to complete the career grand slam at the major that has caused him so much agony down the years.

“It’s been a special place for me to grow up and play our high-school matches, play a lot of golf out here as a municipal course,” Mickelson said. “To make the course open to the masses is a special thing, and to have a major championship on that venue is exciting. Although it’s a lot different than when I grew up 35 years ago, it still is a special site, and it’s in remarkable shape.” 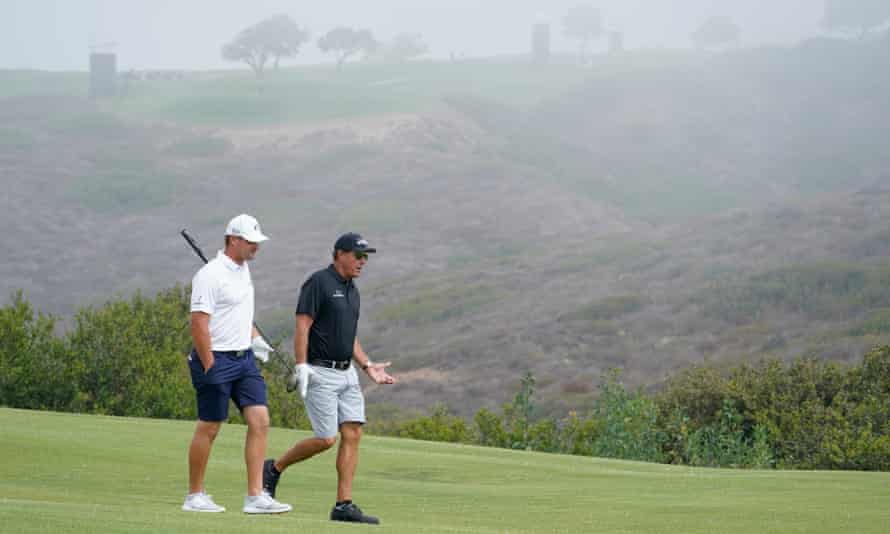 Bryson DeChambeau (left) and Phil Mickelson talk as they walk up the 13th fairway during a practice round at Torrey Pines. Photograph: Michael Madrid/USA Today Sports

The many plotlines converging on the Pacific bluffs have largely been overshadowed by the high‑profile squabble between Bryson DeChambeau and Brooks Koepka, who are on opposite ends of the draw. DeChambeau won his first major last year at the US Open at Winged Foot, where he finished six shots ahead of the second‑placed Matthew Wolff. Koekpa is a two-time winner, having secured the title in 2017 and 2018.

The US Open fancies itself as the toughest test in golf and the narrow fairways, dense rough and glassy greens throughout 7,652-yard South Course surely fit what has become a familiar recipe. But a quick survey of its past five champions – Dustin Johnson, Koepka (twice), Gary Woodland and DeChambeau – have lent credibility to criticisms that the United States Golf Association’s architectural strategy for its showcase event disproportionately favours the tour’s biggest hitters.

“I think everyone knows it as probably the hardest golf tournament of the year,” said Webb Simpson, who won the 2012 US Open at the Olympic Club in San Francisco. “I sometimes forget how hard US Open setups are on these typical courses. But I love it for a week. I don’t think I would like it 20 times a year, but it’s really fun for a week. You feel like it’s kind of survival every day.”

The spectre of Tiger Woods has loomed over the contest even as his future remains in doubt following the February car wreck that left him gravely injured. The 15-time major winner conjured perhaps his most famous victory at Torrey Pines in 2008, out-duelling Rocco Mediate in an 18-hole playoff while playing on a double stress fracture and torn anterior cruciate ligament that required surgery the following week.

A plaque commemorating the famous putt on the 18th green that propelled him into the play-off was unveiled on Wednesday, a permanent enshrinement of perhaps the most dramatic Open. How can this year’s edition possibly compare? We’ll just have to watch and see.