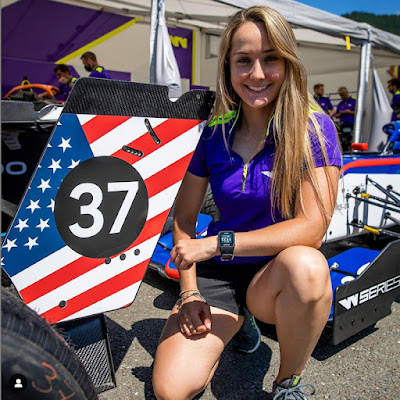 Have you been cheering for Sabré Cook? Haven’t heard of her? Well now that NASCAR is on a breather . . . . it might be the perfect time to learn about this enterprising young racer and the W Series.

If you are not following Sabré , you are probably not aware of the W Series; so let’s start there.

W Series which launched in October 2018, was created to promote female talent with a funded six-round series and a $1.5 million prize pool. It’s goal is to provide an equal opportunity for women and eliminate the financial barriers that have historically prevented them from progressing to the upper echelons of motorsport.

As the dust settles on #WSeriesSilverstone, here are some of our favourite moments from the weekend. ✨#WSeries #RethinkRacing #F1 #BritishGP pic.twitter.com/XBH4TV4tko

W Series drivers were selected purely on their ability and the series’ cars are mechanically identical, which means that W Series races and championships will be won by the most talented drivers, rather than those with the wealthiest backers. Sort of brings Tony Stewart’s new SRX Series to mind.

Twenty-eight (28) drivers advanced to the second round of testing. Sabré Cook, Natalie Decker, and Shea Holbrook represented the United States in this next round. Their panel of judges included W Series directors David Coulthard and Dave Ryan as well as former Indycar driver Lyn St James.

In March of 2019, the eighteen (18)-driver was announced and included Americans Sabré Cook and Shea Holbrook. Sabré finished the 2019 season twelfth in the points. Not too bad when you consider she had never raced on any of the W Series tracks in the past.

The top 12 finishers in the 2019 Season were automatically guaranteed a place on the grid for next season, while any driver outside of the top 12 cut-off needed to enter the selection process again if they wished to return. While Sabré was in, American Shea Holbrook was not on the 2020 Driver’s List. Of course, like most things last year, the 2020 W Series season was sidelined due to Covid.

Nevertheless, Ms. Cook remained terribly busy last year. She put her engineering degree to good use in Texas, helping Formula Mazda design their new FMzR. The FMzR will be the ideal transition from kart racing to open wheel cars. It is expected to debut later this year.

Had such a great time this past month helping @FormulaMazda finish up design on their new car launching in 2021! Very cool to see Moses Smith’s vision come to life.
Now back home just in time Christmas! ??
Happy Holidays everyone! #formulamazda #engineer #design #mazda #xmas pic.twitter.com/xDJ9al2sro

While the project was fulfilling and exciting; Ms. Cook was ready and prepared for the 2021 racing series to begin. Sabré has run three races in the six race 2021 season.

How has the season been going . . . . this writer will let Sabré’s Instagram Feed tell that chapter of the story. 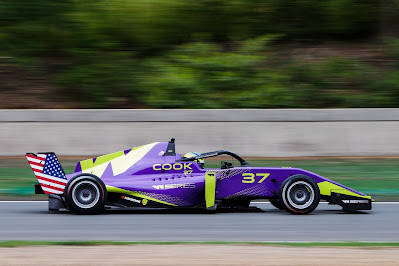 Follow her and leave her a word or two of encouragement.

You can catch all the W Series News on BeINSPORTSUSA