MAZAR-I-SHARIF, Afghanistan — This northern city, long a stronghold of anti-Taliban resistance, fell to the insurgents Saturday after a heavy multi-pronged offensive, launched from four directions.

The capital of Balkh province was believed to be one of the last strongholds of the Afghani government, but apparently fell just hours after it was attacked.

“Early morning, Taliban started attacking from another area. It was a heavy attack on police,” one Afghan Special Forces Commander, who spoke on background in the hours before the city was taken. “It wasn’t our area, but we went there to support and push the bad guys back.”

The bombardment of Mazar came just four days after President Ashraf Ghani flew to the city of half a million to meet with local militia commanders, namely Atta Mohammad Noor and Abdul Rashid Dostum, who oversee thousands of volunteer fighters trying to defend their homeland alongside an overstretched Afghan Special Forces. 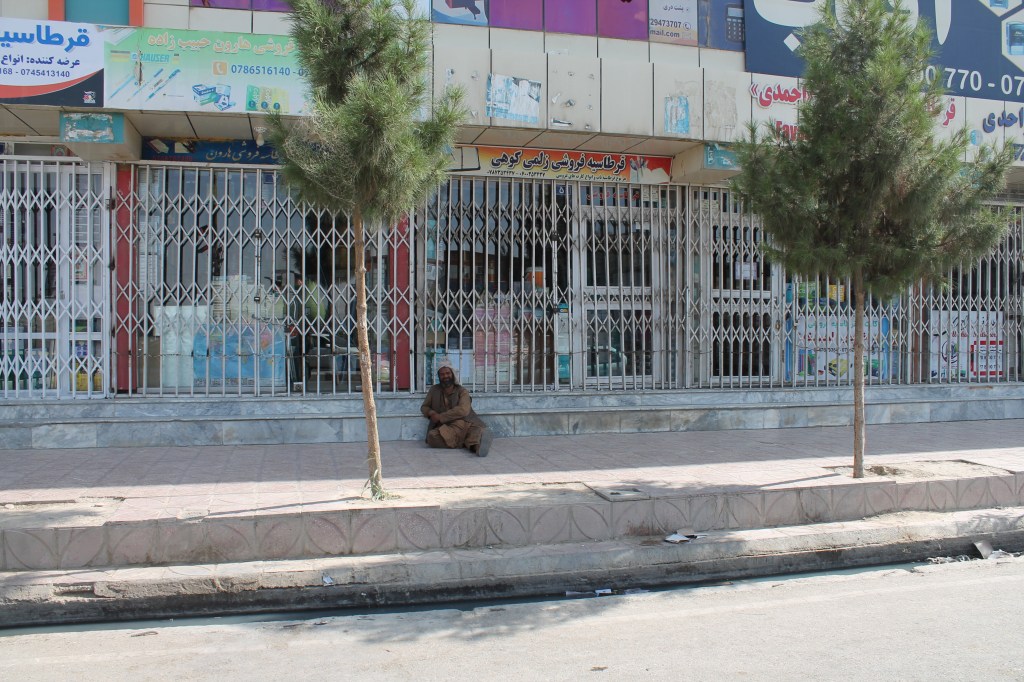 A closed store in Mazar-i-Sharif before the Taliban attack on August 14, 2021.EPA/STRINGER

Multiple insiders emphasized in recent days that militia commanders such as Dostum had been seeking better weaponry from Kabul, and airpower — the one tool the Taliban does not yet possess.

But with the Taliban looming Saturday, the skies stayed eerily empty, despite the $88 billion spent on training and equipping the Afghan security forces over the past two decades, as per Special Inspector General for Afghanistan Reconstruction (SIGAR) reports.

Inside the city, long lines encircled almost every bank as residents prepared to withdraw whatever was left of their livelihoods before absconding. The already displaced lingered in the grassy patches around the historic Blue Mosque and Shrine of Hazrat Ali Mazar, swapping stories about the lives they had just left behind as violence shattered their cities, towns and villages.

It was a dramatic change in less than two days, as the reality of the dire situation sank in. Most artists and academics had already left Mazar-i-Sharif for the capital Kabul, which is also being encircled by the insurgents.

“Everyone is scared,” Muhammad Aslan, a 58-year-old electrical company worker, said with a shrug before the Taliban swept in. “But we are poor people. There is nowhere else to go.” 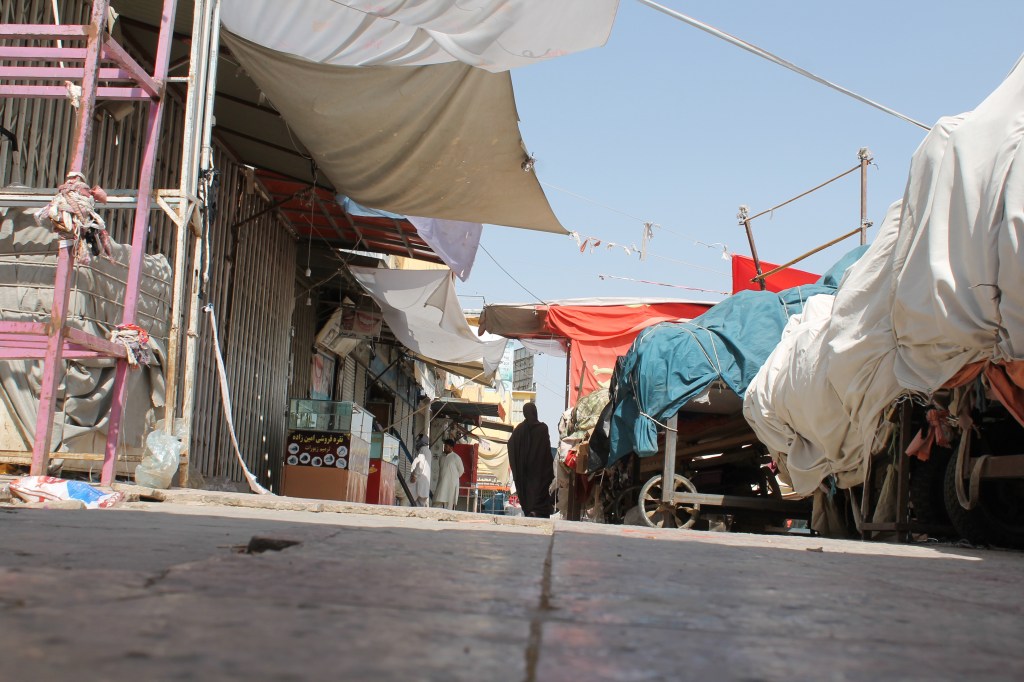 A virtually abandoned market in Mazar-i-Sharif.EPA/STRINGER

One lawmaker from Balkh, Abas Ebrahimzada, told the Associated Press the province’s national army corps surrendered first, which then prompted the pro-government militias and other forces to lose morale and give up in the face of Friday’s onslaught.

All of the provincial installations and government offices, including the governor’s office, are now in Taliban hands, according to the lawmaker.

In the hours before the Taliban fully swept in, Mazar-i-Sharif remained something akin to a haunted ghost town.

Shops and homes were empty and shuttered, gas stations depleted and construction equipment abandoned. Taxi drivers refused to embark down the dusty tracks toward tracks; the road was dotted only with tiny trucks as displaced people fled into the city from their homes just a few miles from the city’s edge. 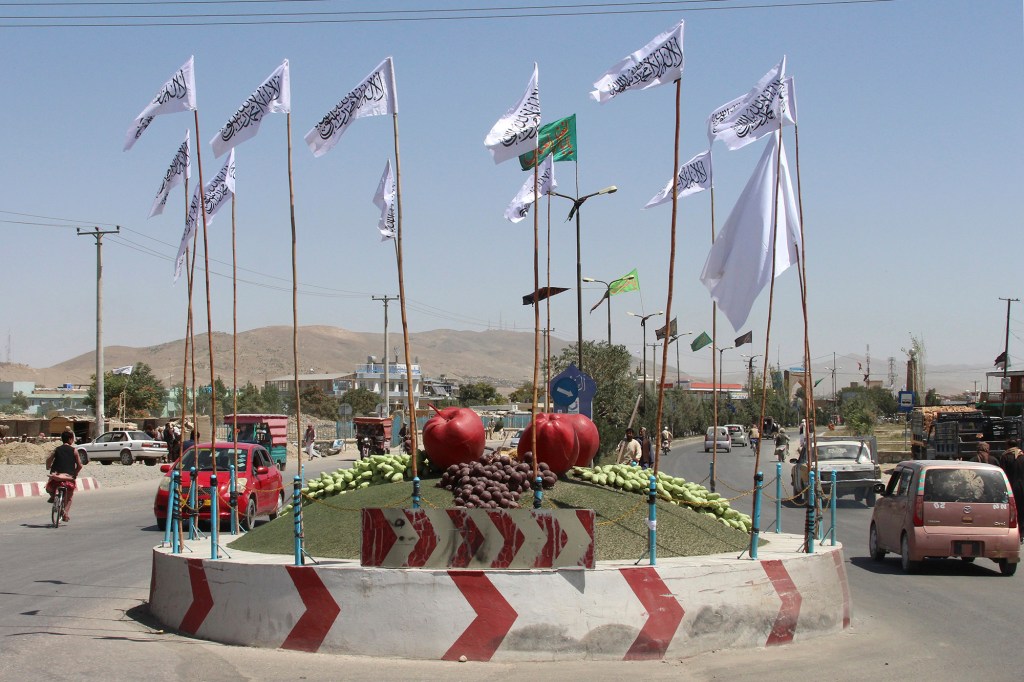 Taliban flags flying in Ghazni, which is southwest of Kabul.AP Photo/Gulabuddin Amiri

The Taliban now controls most of northern Afghanistan and half of its 34 provincial capitals. Earlier Saturday, fighters were reportedly just 7 miles from the nation’s capital, Kabul.

The U.S. reportedly hit the second-largest city, Kandahar, with airstrikes on Saturday.

The crumbling of Mazar is a chilling psychological blow for the fight to hold on to the government.

The city has remained a devout anti-Taliban parcel of resistance for almost two decades, having been ruled by the oppressive Taliban regime from 1998 to late 2001. It was then seized by an alliance of U.S. and Afghan forces in the wake of the September 11 attacks, marking the first defeat of the insurgent political power.