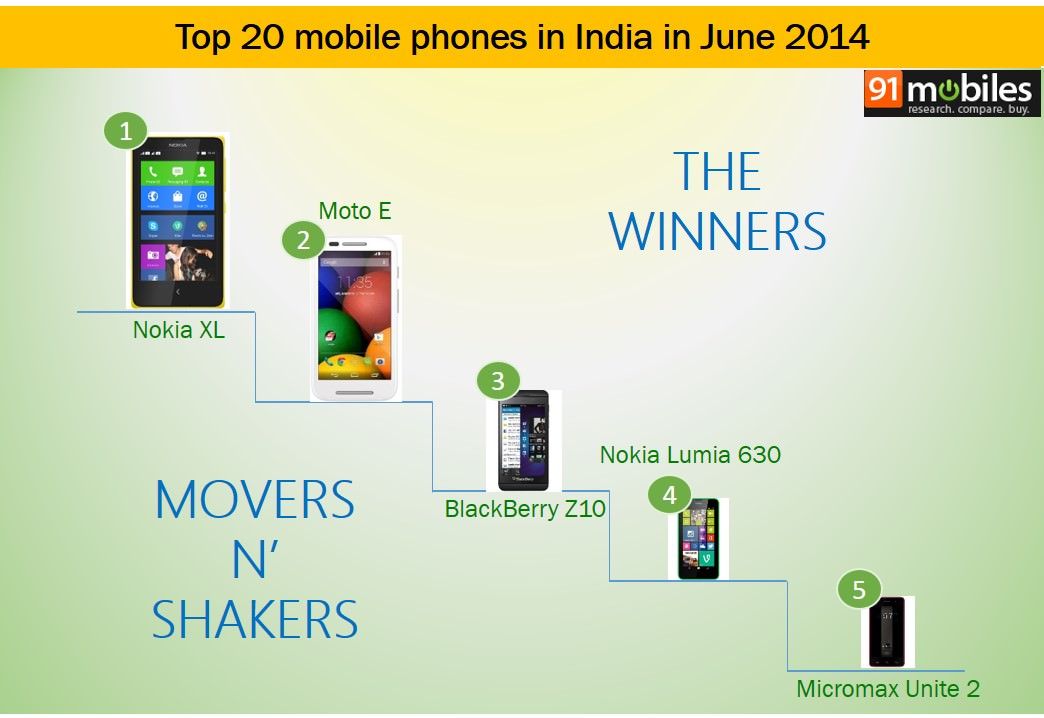 We’re midway through this year and it seems we’ve seen it all – from super-premium smartphones to economical phones and even devices like the Celkon Campus A35K that lower the bar for owning a smartphone. In fact, we believe that all this might start the ball rolling in favour of budget smartphones instead of high-end phones, as the consumers get maximum bang for their buck without compromising their needs. Though the flagship devices will still exist, as a smartphone is much more than simply hardware and the overall experience plays an important role. So if the month of May highlighted a growing trend for budget performance devices, what does the month of June reveal? Read on to find that.

As always, this data is based on the page views by visitors on 91mobiles and simply indicate their purchase intent, which might or might not result in actual sales.

The three devices among the top 5 are the usual suspects as of the month of May, with both the Nokia XL (first impressions) and Moto E (review | FAQs) holding the fort at the first two positions respectively. Nokia’s first dual-SIM Windows Phone, the Lumia 630 (review | FAQs) has moved one position to the fourth spot. But the other two entrants in the top five are definitely surprising, as BlackBerry’s more than an year old Z10 has leapfrogged 12 places reaching the third slot. The Micromax Unite 2 is a new face in the list, debuting at the fifth position. Another fascinating fact to note is that apart from the Z10, all the other devices are placed in the affordable arena, which is unlike previous trends.

While the complete chart of top 20 devices may not feature many new entrants, it definitely saw topsy-turvy standings for the smartphones. Here’s a look at all the devices mentioned along with their gains or drops in rankings as compared to the month of May, along with the platforms, price brackets and launch months. Since a few of the mobile phones are slated to launch in the coming months, we have stated the price segment based on rumours and official pricing in other countries.

As we pointed out earlier, their aren’t many new devices in the top 20. But let’s find out the devices which were able to figure in the list along with possible reasons of their entry.

Motorola’s hugely-popular budget offering, the Moto E is not only credited with being a capable device at an enticing price point, it’s also the device which kickstarted the trend of budget performance smartphones. Amongst its chief rivals, the Micromax Unite 2 boasts of an enviable spec sheet along with featuring some hardware components that aren’t even available in the Moto E. As per our review of the Unite 2 A106, the smartphone comes across as a great bet under Rs 7,000. 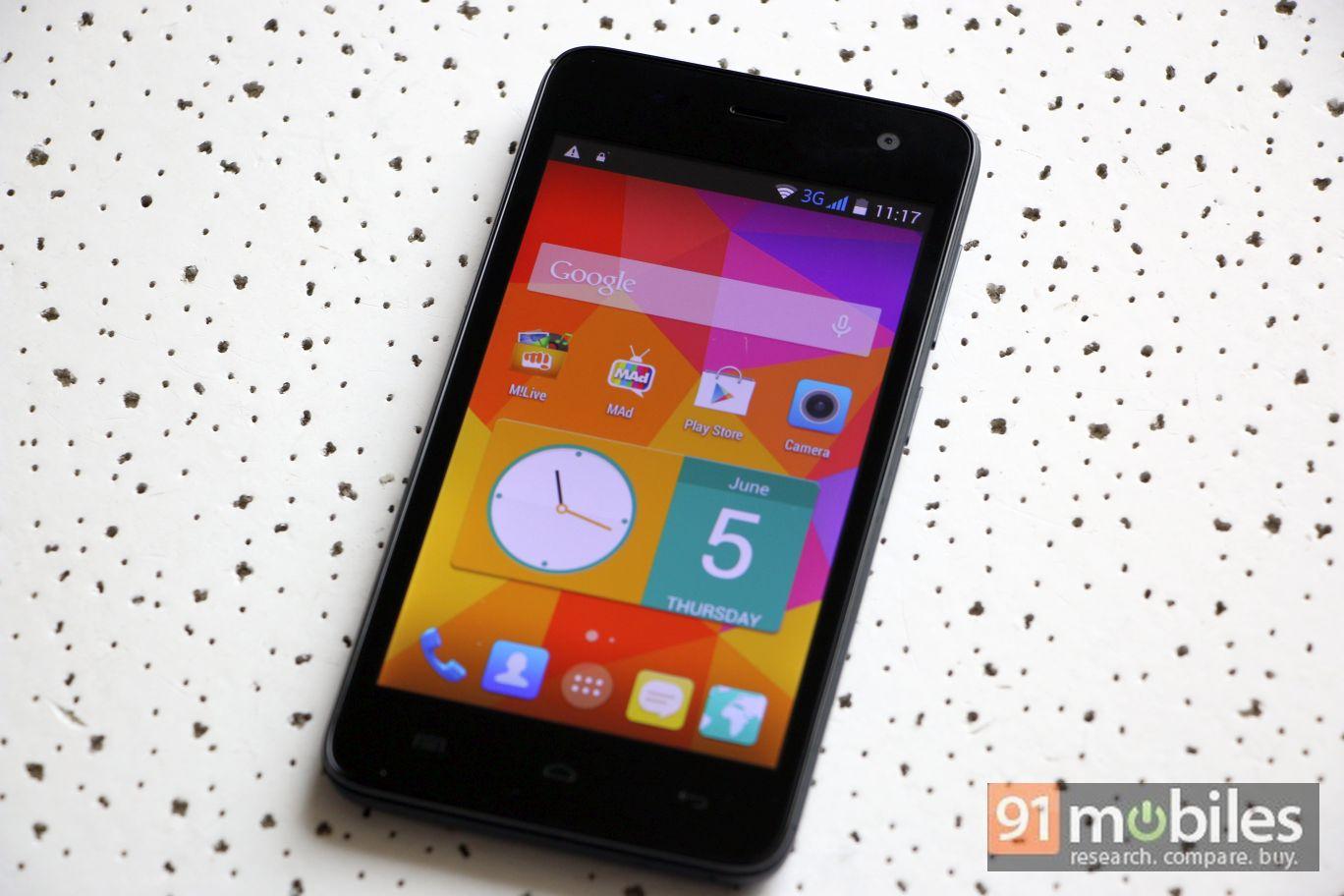 The world of Android saw the coming of top-end offerings from Samsung, Sony and HTC, and now the triumvirate will soon be joined by LG’s latest flagship, the G3. The device was unveiled globally in May and is expected to arrive soon in our country. Alongside top-of-the-line internals, the device is one of the very few options in the market with a rich 2K resolution display. It also gets laser focus allowing for faster autofocus.

With the P81 (review | camera review), the Japanese brand Panasonic is trying to make a space for itself in the mid-range segment and seems that its efforts are paying off well. The 5.5-inch phablet flaunts a powerful 1.7GHz octa-core MediaTek MT6592 SoC among its other specs. To differentiate the device from the competition, it has a custom UI with features like Gesture Play and Multi Play. 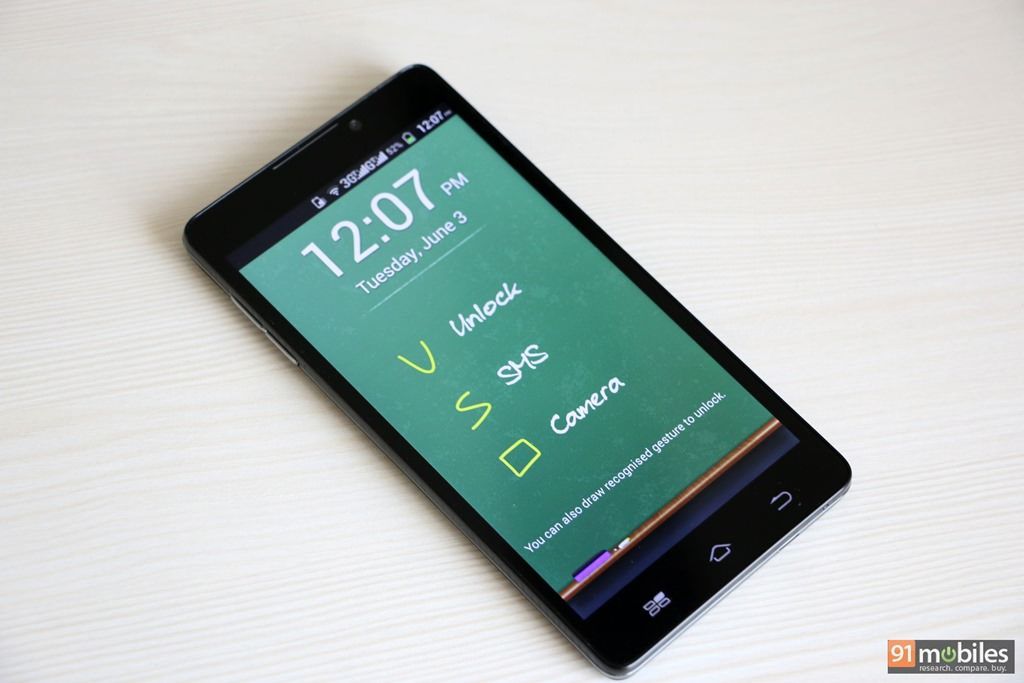 The Micromax Canvas 2 A110 Superfone and its successor, the Canvas HD A116 were the ones which put the Indian manufacturer into the spotlight. The Canvas 2 Colours is a variant of the Canvas smartphone with updated innards to match today’s standards along with the personalisation factor offered by the colourful back panels. The fact that the device is priced aggressively under Rs 10,000 doesn’t hurt either.

These devices bore the brunt of the new entries:

From handful of brands to a diversified list of brands

Compared to trends seen in the months prior to June, the number of brands with their smartphones in the top 20 were limited to seven to eight on an average. However, in the month of June, there are as many as 11 brands in the list. Of course, many of the brands have just one smartphone amongst the top 20, but even then it marks a major shift in consumer perception. Users are now giving more importance to the device itself and the features it offers, rather than the brand name associated with it. Interestingly enough, Samsung is down to its lowest standing ever with just three of its devices making it to the list. That too is a tie as the leading smartphone company is joined by Sony and Nokia. Its Korean counterpart, LG has also made its debut in the top 20 mobile phones for the very first time. 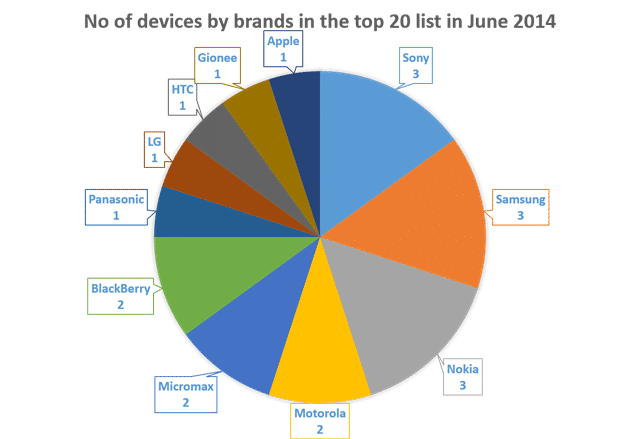 Notwithstanding the emergence of capable basic smartphones or the drool-inducing features and capabilities offered by the premium ones, it’s the affordable price bracket between Rs 5,000 and Rs 15,000 that garners the most interest. More than half of 20 smartphones in the list is made up by this price segment, and that’s the general trend we’re noticing since quite a few months. After that, five devices priced between Rs 15,000 to Rs 25,000 get the attention followed by four devices in the premium territory of Rs 35,000 plus. 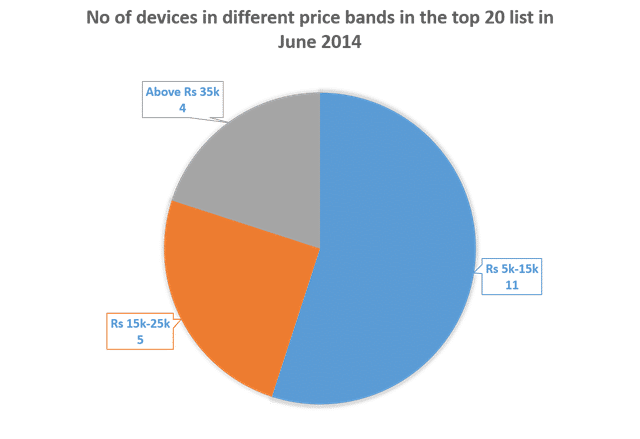 The quest for the latest OS

Like it or not, one of the biggest problems plaguing the Android ecosystem is that the devices aren’t readily upgradeable to the latest version. Sometimes the hardware isn’t compatible, but most of the times it’s due to manufacturer’s laxity. Forget upgradeability, even the new Android smartphones being launched usually don’t have the latest iteration of the OS. Things are changing though, thankfully. Many of the devices these days are coming with the latest Android version and consumers are also leaning towards them. In the month of June, there were seven smartphones running Android 4.4 KitKat in the list.

One thing which we’re surely interested to find out is whether the OS wars will come to the fore, as Android has completely dominated this list so far. Perhaps things will remain the same or maybe budget offerings from Indian manufacturers running Windows Phone OS – the Micromax Canvas Win W092 / W121 (first impressions) and XOLO Q900s will shake things up. What do you think?