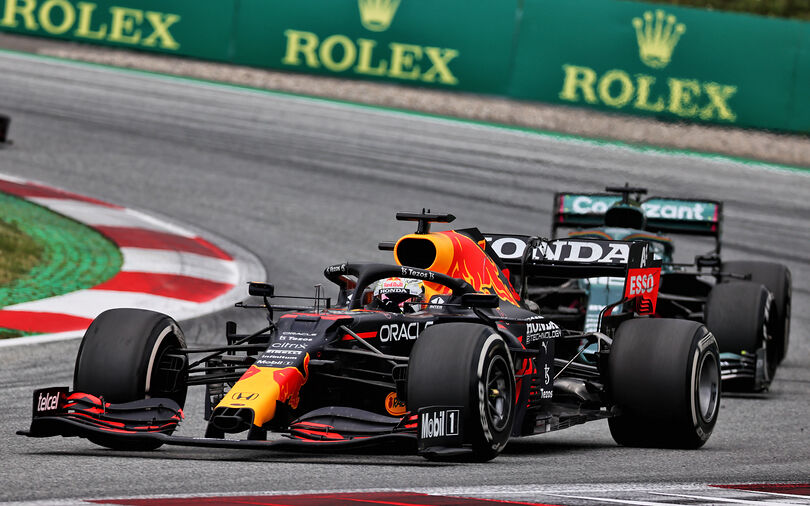 Max Verstappen had a seemingly easy afternoon near Spielberg as he lead the Styrian Grand Prix from start to finish, never even having to worry about a challenge from behind. Lewis Hamilton and Valtteri Bottas saved the day for Mercedes by completing the podium.

For the start of the Styrian GP, Max Verstappen was in front of the grid, next to Lewis Hamilton after second-fastest man from qualifying, Valtteri Bottas dropped to 5th place due to a penalty. Tsunoda Similarly had a penalty, for impeding, and started from 11th . Williams’s George Russell benefited to start from 10th with brand new medium tyres.

Those ahead of him were all on used softs, except for Verstappen and the Mercedes duo who had mediums in Q2, so they’re starting on used mediums.

As the lights went out, the front runners got away cleanly, though Norris was off track on the exit for Turn 1.

In the midfield, it was close between Stroll, Alonso, Russell and Tsunoda. Alonso briefly moved up into 7th but lost the position to Stroll again. At the end of the lap, both moved up a spot as Leclerc dove into the pitlane. The Ferrari driver has broken his front wing on Gasly’s left rear tyre. Leclerc managed to return, but Gasly retired from the race after only just making it back to the pits.

Starting from 13th, Daniel Ricciardo managed to benefit a lot, moving up into 9th after having passed Tsunoda and Sainz in the start as well. However, on lap 5, Daniel lost a position to Tsunoda, and the next lap lost another three positions due to a power issue. When the team told him the issue was resolved, Daniel was back in 13th.

Two laps later, the leading McLaren also dropped a spot as Perez got ahead to take third. The move brought Norris right into Bottas’s path, enabling Bottas to make an easy pass in Turn 2, one lap after Perez did exactly the same.

By lap 16, Verstappen had built up a 3.5s lead on Hamilton, and 16s on Perez. Bottas, Norris and Stroll were all more than three seconds apart, but behind Alonso, a train started to form as the Spaniard was too far behind Stroll to use DRS, while everybody behind still managed to do so.

Russell however was told to not come too close to the Alpine in order to keep car temperatures under control. The Englishman pitted on lap 26 but had an extremely slow stop, dropping him back to 17th.

Perez followed the next lap and also switched to hard tyres. Mercedes responded to pit Bottas, bringing the Finn out just ahead of Perez despite two purple sectors for the Red Bull.

Stops for the front runners were faultless and therefore resulting in hardly any change on track.

Around lap 50 a brake issue emerged for Verstappen, resulting in a bit of a chat with his race engineer that led to “ok, I’ll try to be careful”. Clearly, it didn’t seem to be a big problem, as Verstappen kept on extending his lead after Hamilton’s put early on in the stint that failed to considerable reduce the gap to the leader.

Perez meanwhile didn’t get close enough to Bottas to hope for third, so he pitted to do the final 16 laps on a fresh set of medium tyres. It allowed him to take the fastest lap away from Hamilton while pushing to get back in Bottas’s slipstream.

As Verstappen won, Hamilton gave it all and set the fastest lap for the one extra Championship point. Bottas meanwhile had gotten company from Perez but managed to hold him off for the final podium spot.

Lando Norris finished a distant 5th, and was actually lapped, showing how much ahead Red Bull and Mercedes were this weekend. Carlos Sainz finished 6th, 12s ahead of Leclerc. The latter must have enjoyed a large number of overtakes he performed this race after the early-race front wing damage.

Note – Hamilton scored an additional point for setting the fastest lap of the race.

“The Hungaroring is a circuit that I love” – George Russell