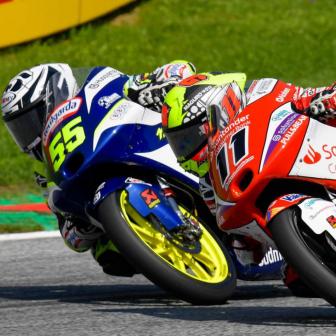 Darryn Binder (Petronas Sprinta Racing) is next up of the Championship top eight. He’s raced the venue three times, plus the 2018 sessions, and the South African arrives looking to get back on his early season podium form too. Next is Romano Fenati (Sterilgarda Max Racing Team), who remains third in the Championship as his consistency and consistent speed rolls on, and he ramps up the count to six. He’s never taken a podium, however… that honour belongs solely to compatriot Niccolo Antonelli (Avintia VR46). Antonelli hits a magnificent seven previous races at Silverstone, plus 2018 and including that 2015 rostrum finish. Coming back from injury and now eighth, one point behind Sasaski, he’ll want to join the Japanese rider in finding a little more luck.